The tank problem in the area of the island Krk seems to be solved! From 17.11.2020 the Flash boat gas station has resumed its operation at its usual place. However, the INA filling station in Krk is still closed.

For the many skippers, whose ships are based in the area of the island of Krk, the news should be welcome, because for wintering the tank should be full to the brim to prevent moisture from the air entering the fuel or diesel tank via the tank ventilation system, which then condenses on the tank walls and settles on the tank bottom.

Particularly in boats that are operated with diesel generators, this leads to a higher water content in the fuel with simultaneously reduced lubricity and ultimately even to the dreaded diesel plague, if not appropriately added.

In gasoline, water ingress can lead to spot corrosion in the fuel system and cause the failure of such important components as the tank or fuel pump.

Coronavirus Croatia: Only cautious relaxations as of February 15, 2021

Croatia: Snow up to the coast

Beliefs on board: From red socks, flower arrangements in the stern and ritual scratching the mast. 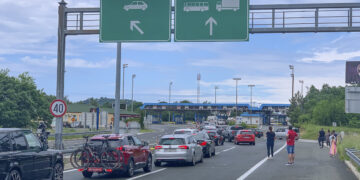