If you were to make their activities the subject of a TV series, it would probably be called CSI Konstanz, but in reality in everyday office life it looks different from the TV series: We are talking about the Constance Competence Centre for Boat Crime, which in expert circles is reduced to the abbreviation KBK in plain civil servant German. However, objectively seen from the outside, the term “competence” is clearly missed out. Even though the investigators from Constance are not granted such lavish special rights as the heroes in the American TV series, they have been able to seize assets worth around 30 million euros so far (as of the end of 2018). This means that they have probably already gained the necessary respect in the relevant circles.

Since the theft or misappropriation of boats does not stop at national borders and since in practice only random checks on persons and vehicles are carried out at the borders in the Schengen area, the door is literally open to thieves. This is precisely where the work of the Constance-based special investigators comes in, which in principle is based on the two pillars of police action: Prevention, in order to give potential criminals no opportunity at all to put their planned punishable actions into practice and, if a punishable act has occurred, to bring the perpetrators to justice by means of rapid and thorough clarification. This is where the circle closes again: clarification of the crimes with subsequent conviction of the perpetrators is still considered the best way of prevention.
One of the most spectacular cases solved by the team of experts from Constance in recent years was a catamaran costing 800,000 euros, which the perpetrators chartered in Croatia and which finally found its way to the Caribbean island of St. Martin via registration in Germany. Here, the investigators from Constance struck and confiscated the luxurious sailboat.
But the daily business looks quite different: Stolen outboard engines and smaller sport boats change hands in an unlawful way, summer and winter. “Because many owners usually do not notice the theft until the perpetrators are long gone, searches often come to nothing at first,” a KBK investigator explains to SeaHelp. In the second attack, when the loot is sold as stolen goods, the boat specialists from Constance usually roll up the field from behind and get to the perpetrator via the fence.

That’s why the office repeatedly warns of alleged Internet bargains that are offered with a more or less credible legend. But as so often in life: the lower the price of the object of purchase, the less caution potential buyers exercise. If it turns out that the alleged bargain was nothing more than stolen goods, long faces usually follow and ultimately even confiscation, total loss of the money paid and, as a “big end”, usually a criminal complaint for the purchase of stolen goods. There are no excuses here, as the investigator explains: “There is no such thing as acquisition in good faith, even if the price was almost normal for the market.

And, he is offering some additional good advice for vendors: But also when you have a pleasure craft for sale, there will most probably be some “prospective buyers” whose do not aim to buy your boat but, on the contrary, want to pull your hard-earned money out of your pocket by telling the most diverse and plausible stories about transport solutions, currency transactions and the like. Here, as well, the investigators are quite helpful and saved many boat owners from considerable financial loss.

It is common knowledge, that the criminals mostly head for Eastern Europe where, under certain legal conditions, there exists the possibility to acquire the property of stolen goods. Once the frontiers of the Schengen area have been crossed, it will be very difficult and much more complex to recover the stolen goods. In most cases, the criminals will be caught by the maritime investigators as they have to earn their money right here. And, as the investigator adds with a twinkle: “A home match is always more efficient…” And there is one thing, most criminals do not consider: The transport vehicles and their contents will be withhold, together with a stiff fine. That will give them twice the pain. 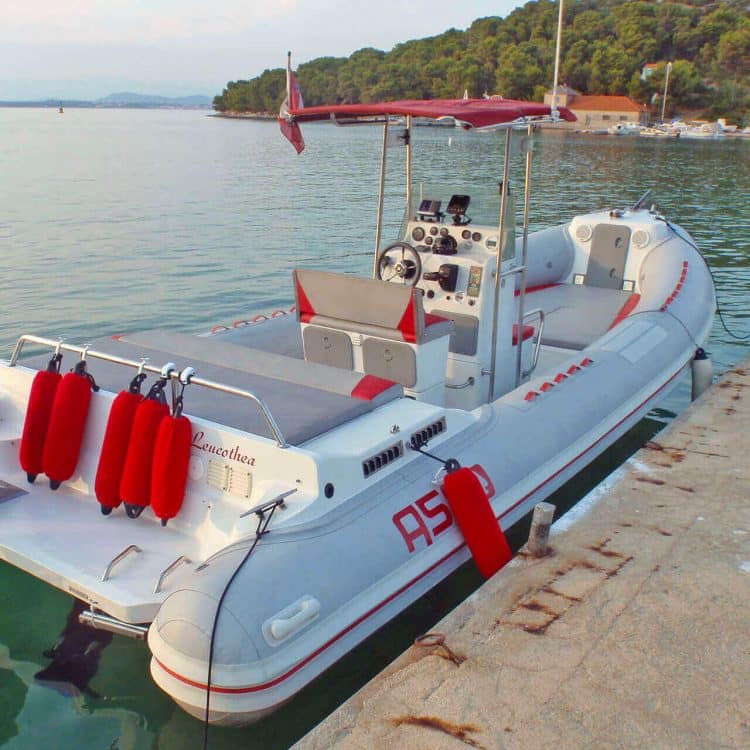 Stolen and never reappeared - the owner is still mourning his RIP. 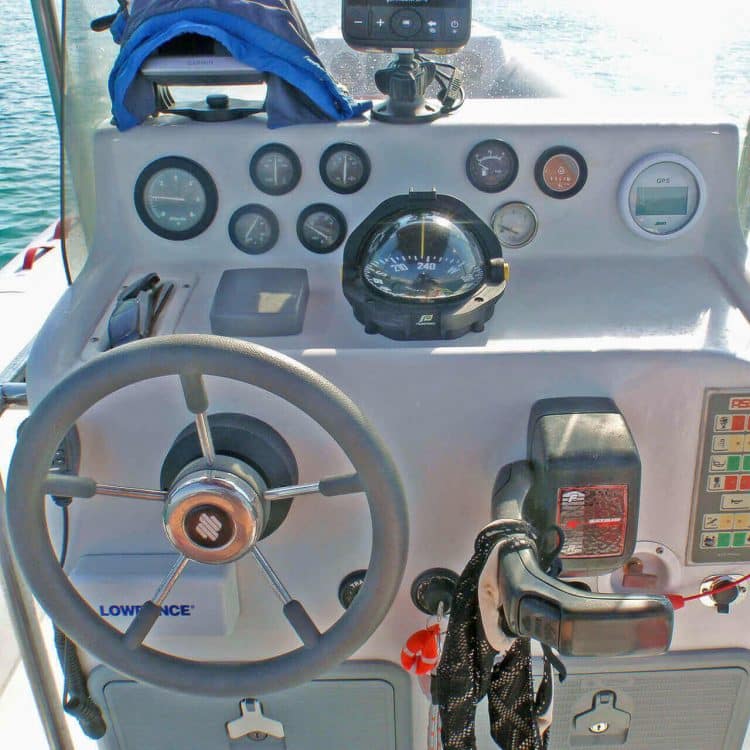 Stolen and never reappeared - the owner is still mourning his RIP.

Here, on the SeaHelp homepage, a special request form with all the necessary data for an information request was set up and will be submitted by the SeaHelp headquarters to the specialized police unit in Constance. In addition, owners will find here a form for sending all relevant data in the case of a theft to the KBK, in order to initiate an immediate police investigation in the search systems. Here, wanted posters and leaflets can be consulted, the latter giving valuable advice with reference to buying boats and maritime equipment as well as notes on behaviour in the case of damage incidents. But for clarification a spokesman of the special police unit points out:”The reporting of the theft to us is nothing more than an additional service by the police. Any criminal offence must be reported as soon as possible to the local police authorities on site.”

And although the damage is supposed to be finally covered by the insurance company, the intangible damage can hardly ever be compensated. And, even worse: Those, who have been taken in by a cunning crook and are heading for a criminal charge on suspicion of receiving stolen goods, have to struggle hard in order to show themselves as innocent. 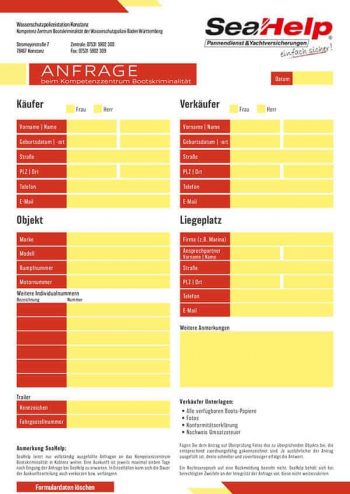 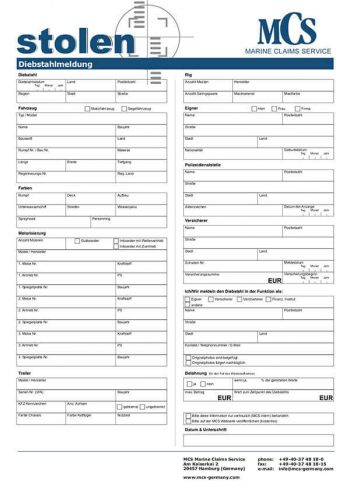 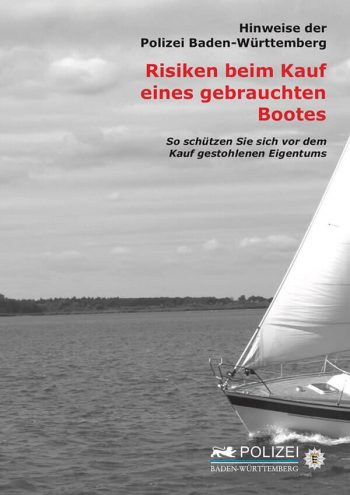 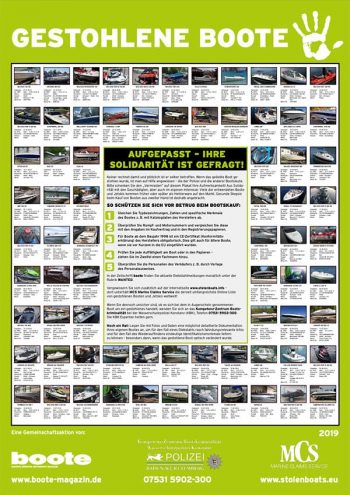 The company MCS (Marine Claims Service GmbH) maintains a database of stolen boats and yachts on the Internet. You can reach the site via the following link: www.stolenboats.info