Thunderstorm at sea: What to do when it flashes and thunders at sea? SeaHelp gives tips on how to weather the storm.

Autor: Sandra-Valeska Bruhns
Inhalt Anzeigen
1. Storms announce themselves
2. Prepare ship and crew for the thunderstorm
3. Witch kitchen at sea
4. Hands off the metal!
5. Pull the plug!
6. Go lookout!
7. Is a sailing yacht a Faraday cage?
8. Strong magnetic field
9. Tender, Runabouts & Ribs – off to port
10. Thunderstorms are particularly frequent in these maritime areas
11. And when the storm is over?

The sky darkens, angry gusts scurry across the water, a dull rumble can be heard and the first flashes of lightning twitch on the horizon: a thunderstorm is on its way. If the storm is already within sight and sound, there is not always enough time to reach a safe harbor or a place in a safe anchorage. With proper preparation and prudence, you can brave the forces of nature at sea.

Thunderstorms rarely come as a complete surprise. Most thunderstorm fronts are announced by the weather services, also the conspicuous cumulonimbus clouds, which are ominously high, indicate a thunderstorm. In addition, there is often sultry air with a piercing sun or leaden warmth that settles over the strangely glassy water. The calm before the storm… If you have a barometer on board, you will notice that the air pressure drops rapidly hours before the storm starts. 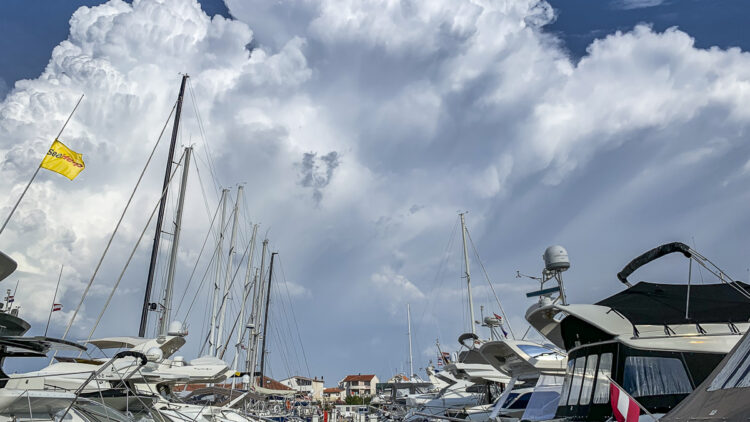 Prepare ship and crew for the thunderstorm

Clearly, the very normal rules of conduct during storms also apply at sea. Meaning: no one from the crew goes swimming. Instead, the swimwear is rather taken off and waterproof oilskins are put on, in the thick, dark clouds can be a lot of rain and hail in addition to any amount of tension. Then the ship is made weatherproof. Dishes, glasses, books, smartphones and whatever else is lying around loose in the cockpit is brought below deck and stowed away, and the cushions are packed into the forecastle boxes to protect them from moisture.

In addition, everything that can offer the wind a surface to attack is properly lashed or packed away, the sprayhood is made ready, the bimini folded. And – safety first: The whole crew must now wear life jackets and should be informed once again where on board hand fire extinguishers or even fire extinguishing spray are, so that in an emergency a fire on board can be quickly extinguished.

If the thunderstorm has to be weathered at sea, skipper and crew should be prepared for a wild mix of fierce gusts up to hurricane force from various directions, coupled with heavy rain that barely lets you see as far as the bow. The best thing to do before the storm arrives is to lower the sails and start the engine. With engine power, wind and heavy rain can be better controlled. A critical look at the nautical chart shows whether the sea area can continue to be navigated without problems, or whether shoals, sandbanks or obstacles in the water must be navigated around. 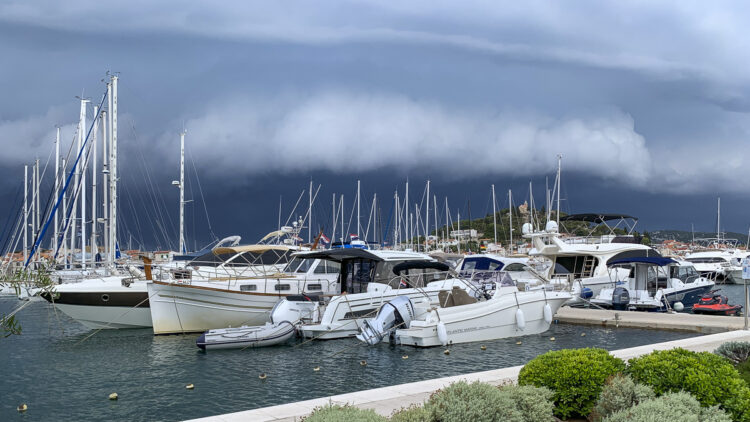 Hands off the metal!

If the thunderstorm is overhead: hands off all metal. Holding onto the railing is as bad an idea as seeking shelter near the mast. At least 30 centimeters away from the mast, which with its height is the main point of attack for lightning, is considered safe. And the stainless steel anchor chain should not be tampered with during thunderstorms. If you want to safely pick yourself up on deck with the carabiner from the lifebelt, don’t use any metal fittings either. The safest place to be during a thunderstorm at sea is below deck. Those who must remain on deck should wear shoes with a rubber sole if possible, sit in the cockpit and let the autopilot operate the (metal) steering wheel.

Lightning always seeks the highest point. At sea, these are sailing yachts with their high masts, but also motor yachts if there is no larger or even higher ship nearby. To minimize the possible damage on board caused by a lightning strike as far as possible in advance, all electrical equipment except AIS and radar and navigation electronics should be disconnected from the power supply when the thunderstorm starts. Those already safely in port should pull the shore power cable as a precaution.

Below deck, it’s dry, sheltered from the wind and safe – but someone still needs to keep a lookout, especially if there are other recreational vessels or even commercial shipping in the sea area. Visibility during storms is often severely limited by heavy rain, here – if available – especially AIS and radar help to avoid collisions.

Is a sailing yacht a Faraday cage?

Mast, stays and shrouds form the basic framework of a Faraday cage, which is a continuous electrically conductive connection that protects the occupants of this “cage”. However, these parts on deck form only a part of the protection zone; the discharge for the electricity discharging during a lightning strike into the ground or, in this case, into the water is still missing. In the case of steel or aluminum ships, this is provided by the hull of the boat, so that if lightning should strike the mast, it exits through the hull of the ship. The Faraday cage thus protects the crew on board from a direct lightning strike, but not from its sometimes severe consequences for the ship.

With wooden or plastic yachts, it is not so easy to predict where the lightning – after it has struck the highest point of the environment, the mast – will emerge again. Often this is at the keel, but sometimes it is just above or below the waterline. If the shrouds and mast are grounded to the keel with cables or copper conductors, the incoming electricity is diverted through the keel into the water. This prevents the many thousands of volts released during a lightning strike from passing through shrouds and chocks into the hull, causing holes or even deformation in the GRP. Another exit point of lightning during an impact is often the seacocks.

SeaHelp Extratipp: If lightning and thunder coincide in time directly above the ship or in the immediate vicinity, the yacht should always be examined afterwards for possible lightning damage. Especially damage to electrics and electronics are often not apparent at first glance. After each lightning strike, the yacht should always be craned and inspected for damage, especially to the keel.

Even if lightning does not strike directly on board, a high level of electricity and a strong magnetic field may be generated in its vicinity, which will also affect electrical, electronic and magnetic items on board. Magnetic compasses, navigation instruments and even laptops can be broken in this way. Thunderstorm-tested skippers: inside recommend laptops and smartphones for the duration of the thunderstorm in the protected oven or under blankets in the bunk to store.

Tender, Runabouts & Ribs – off to port

With an open boat, you have no business at all at sea during thunderstorms – the boat offers no shelter for the crew in a cabin, so there is no way to protect against a lightning strike. If there is a thunderstorm or storm warning, do not set sail or stay near a harbor! If the thunderstorm does hit you on the water, the same rules of conduct apply as for walkers or cyclists in the middle of an open field: crouch down and wrap your knees around your arms. This way you avoid becoming the highest point for the lightning.

Thunderstorms are particularly frequent in these maritime areas

In the tropics, heat thunderstorms with heavy rainfall occur almost daily; the northern Adriatic Sea and Turkey’s southern coast also occupy a top position among thunderstorm-rich areas. An impressive overview of lightning activity worldwide is available at blitzortung.org. Detailed information on thunderstorm activity in Austria is available from the experts at ALDIS, the Deutsche Wetterdienst (DWD) has developed its own warning weather app, whose thunderstorm monitor indicates the path of the expected storm and the expected gustiness. In the free SeaHelp app for Apple– and Android devices, the “Weather Warning” function is integrated, which warns of thunderstorms and severe weather in the cruising area via push message.

And when the storm is over?

The first rays of sunshine are back, it stops raining, the barometer shows a clear increase in air pressure – the storm has passed. The air now often seems clearer and fresher. Time for the crew to settle back on deck. Take off the wet clothes and hang them over the railing and main boom to dry, and check whether anything has been broken on deck by heavy wind or downpour. And then: Just sail on and enjoy.