Autor: Matthias Müncheberg
Inhalt Anzeigen
1. Baška – popular seaside resort with long pebble beaches and murings for yachts
2. Vrbnik – excellent wines and a great view from the old town to the Kvarner Bay
3. The Gospoja winery was founded in 1995 and offers white and red wines, as well as sparkling wine and various brandies
4. Sveti Juraj – swimming stop in the heart bay with a visit “At Robert”
5. Porat – Quaint konoba right on the harbor, guests can moor right in front of the restaurant
6. “Most popular ruin in Croatia” – visit the former resort Hotel Palace
7. Interactive cruise map
8. Tip from the SeaHelp editors:

The Croatian island of Krk, located in the Kvarner Bay southeast of Rijeka, together with Cres the largest island in the Adriatic Sea, attracts yacht crews with quaint konobas, beautiful swimming bays such as the Heart Bay, the famous Žlahtina wine and the “Lost Place” Palace Hotel in Haludovo. (Interactive cruise map at the end of the article.)

No less than ten charter companies offer yachts of various types and sizes from Marina Punat, just 30 kilometers from Rijeka International Airport; those who wish can start here with their chartered boat for exploration trips to the eastern side of the island and visit, for example, popular seaside resorts such as Baška or try the excellent Žlahtina wines with traditional Croatian dishes such as Šurlice (a pasta dish) in Vrbnik.

Heading west from Punat, the famous Heart Bay or – directly opposite – the island of Plavnik beckons for a swim stop, or the crew can visit Malinska Bay to the north and pay a visit to the “most famous ruin in Croatia” at Haludovo.

From Marina Punat it is only a half-day cruise to the popular seaside resort of Baška in the southeast of the island of Krk. To get to Baška, sail counterclockwise around the southern cape of the island to reach the bay of the same name. Attention: in the Senjska Vrata between Krk and the opposite island of Prvic, a strong jet effect can occur during bora, which can sometimes reach hurricane force.

Baška itself attracts bathers and sun worshippers with long pebble beaches stretching along the entire northern side of the bay. For yachts, there are moorings on the inside of the southern pier very close to the harbor fire, there is a small market as well as restaurants. There is often a swell in the harbor itself; excursion boats often moor at the middle pier.

During bora, the harbor quickly becomes a mousetrap and should only be approached during pronounced high-pressure conditions; if you are surprised by the bora, you may exceptionally drop anchor in the middle of the harbor basin.

If you continue your cruise counterclockwise from Baška, you will pass the bathing bays of Vela Luka and Mala Luka and then sail north along the Vinodolski Channel. At Waypoint 7065 Coastal Handbook Croatia 1 (Approach Vrbnik) we turn west – now the bay of the same name Vrbnik is directly in front of us.

In the harbor itself there are several mooring places, but it should be noted that Vrbnik is more suitable for smaller yachts and offers no protection from bora. Attention: the main pier / breakwater must be kept clear from 10 am to 5 pm, and front area of the harbor basin lie stones.

In the harbor itself there are restaurants, and a small beach invites you to swim. However, among the best restaurants on Krk is Nada at Glavača 22, with a beautiful terrace overlooking the water, many specialties and its own brand of wine – prior reservation is recommended.

The Gospoja winery was founded in 1995 and offers white and red wines, as well as sparkling wine and various brandies

Once moored in Vrbnik, you should also not miss tasting the world-famous Žlahtina wines at Hotel Vinotel Gospoja high on the steep cliffs of the village with a beautiful view of the Kvarner Bay.

Alternatively, sailors, leaving from Marina Punat, can also direct their course to starboard. From the marina, it’s just a stone’s throw west to the well-known swimming cove of Sveti Juraj (also known to German-speaking guests as Herz-Bucht or Y-Bucht, see our SeaHelp video). Attention: there is another place called Sveti Juraj on the Croatian coast, ten kilometers south of Senj, this place is not meant.

From here it is only 30 minutes walk to a restaurant, known in skipper circles as “At Robert’s“, with dishes made from local, regional products (about 200 meters in altitude).

For bathing enthusiasts, there is also the island of Plavnik, directly south of the Herz Bay opposite: here long, flat beach sections alternate with beautiful, sheltered bathing bays, see also our SeaHelp videos.

Porat – Quaint konoba right on the harbor, guests can moor right in front of the restaurant

From Sveti Juraj or the island of Plavnik, we now first continue northwest to Rt. Glavotok, after another five nautical miles with a northeastern course you finally reach Malinska Bay and can enter the (small) port of Porat.

There are mooring lines in the harbor, but they are only suitable for boats up to eight meters in length. Directly at the harbor is the rustic konoba of Porat, which has a wide range of international, Mediterranean and local dishes on the menu. Good for arriving sailors: guests can moor their lines right in front of the konoba.

Directly opposite Porat’s konoba, on the other, eastern side of Malinska Bay, the (closed) resort Hotel Palace invites you to visit. The former luxury hostel is a so-called “lost place” and is often touted on the Internet as the “most popular ruin in Croatia”. 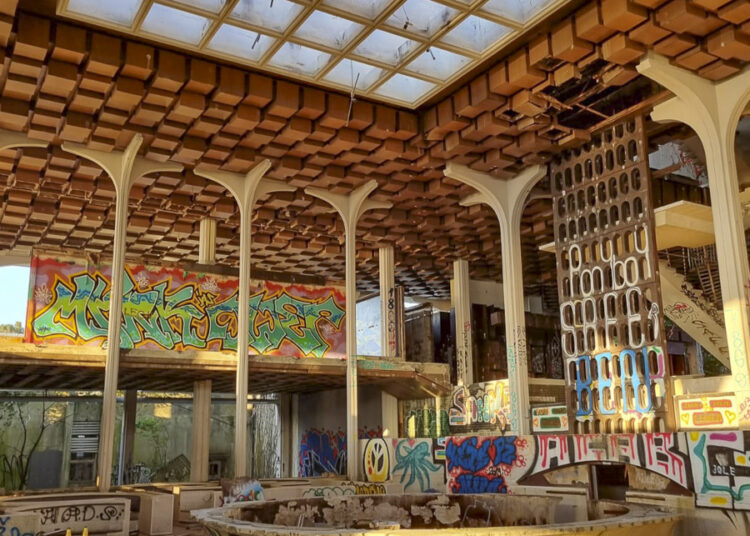 Opened to guests in 1972 under the name Penthouse Adriatic Club, the hotel complex left nothing to be desired at the time. 45 million dollars is said to have been invested in its construction at the time by Bob Guccione (1930-2010), founder and publisher of the US men’s magazine Penthouse.

In 1991, the hotel closed and served as a refugee shelter until 1995. Then it was reopened under the name Hotel Haludovo, but already in 2001 it was finally the end of the operation of the dilapidated building. Today, the ruins, which can still be seen in their former glory, can be visited.

Tip from the SeaHelp editors:

For the described cruise, many drone photos, drone videos and 360 degree images are available on our SeaHelp app, so you can already look at many bays in advance and plan your cruise perfectly.