No calm after the storm: What owners should do now

Autor: Wolfgang Kröger
The first autumn storms have subsided and, luckily, have not caused such a damage in Croatia as, for example, in the Italian Rapallo. Nevertheless, owners whose boats are permanently in the storm-hit regions, should inform themselves immediately about their condition.

In general, SeaHelp advises first of all to take a look at the terms and conditions of the respective boat insurance: Some insurers seem to have now decided to classify storms with an intensity of more than 70 knots as “force majeure”, which ultimately frees them from liability in case of damage.

The next problem that might crop up is that most ships are now in the winter and the owners live abroad. They rely on a secure mooring in one of the large marinas or on land in the dry marinas and attentive marina staff. But the classic storm damage usually includes small cracks in the tarpaulin, which initially go unnoticed, but in the course of time allow more and more water to go through. This can lead to significant damage over the winter if the water additionally causes a short circuit in the bilge pump. Although the marina employees try to thoroughly inspect the ships after a storm, but where people work, mistakes can also occur. Therefore, SeaHelp advises ship owners, if possible, to thoroughly inspect the ships themselves or to ask a resident to take over this job for him. At least you should inquire in the marina for the condition of the ship – to be on the safe side – in writing.

It should be considered one thing: Owners are obliged to the insurance companies to minimize possible damages, in order to take advantage of insurance services in case of emergency. Anyone who consciously ignores possible damage risks his insurance cover.

Although the damage was limited in Croatia and northern Italy, all marinas open to the south, such as the Krk Town Harbor or Marina Rab, were more exposed to the first violent autumn storms (Yugo) than the northern open marinas, which were more prone to the bora could be threatened. 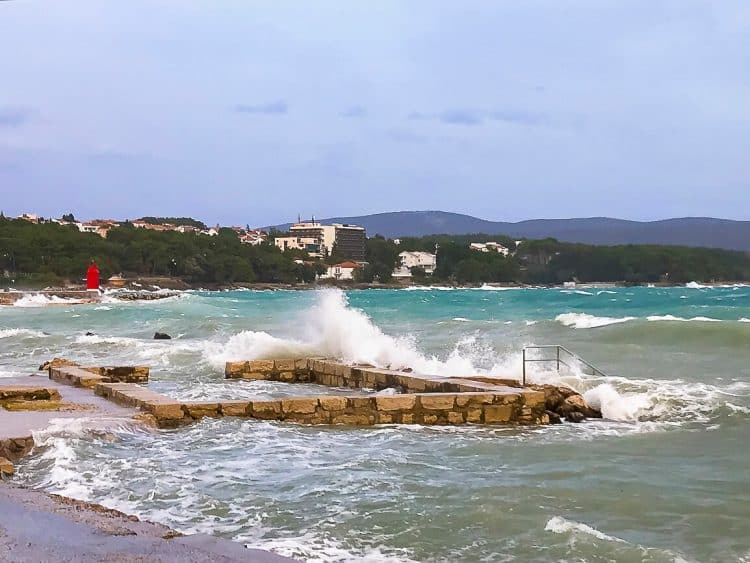 In this case, the Olive Island Marina once again proved exemplary. Their manager Toni Antisin on request: “During the storm, our employees guarded the ships of our guests virtually around the clock, and webcams also provide information about the situation in the marina. I myself have all the webcams on my mobile phone and monitor in such cases the situation on the piers every hour . With this care, the guests of the Olive Island Marina were spared the worst. Due to the particularly protected location, storms and waves can hardly affect the resident boaters here.

Important in any case: Check the fenders, tighten the lines and check the proper fit of the cover so that there are no nasty surprises at the beginning of the next season.