Home > This & That > The plastic flood: SeaHelp asks not to be careless with plastic waste

The plastic flood: SeaHelp asks not to be careless with plastic waste

Beach walks were one of the exciting experiences of summer vacations by the sea in my childhood. The object was to find treasures such as mussel shells, snail shells, sea urchin spines, remains of crab shells and other mysterious remains of sea creatures. All of this can still be found on seashores today, and it has been joined by another fraction of flotsam and jetsam. Garbage of every size class, consisting of a wide variety of materials. Dominant: plastic.

The 200 or so different types of plastic are based on petroleum and consist of long chains of giant molecules called polymers. Depending on the desired use, the plastic in question can be solid to featherweight, rigid to flexible, and extremely diverse in design due to chemical additives. Since plastic does not rust, it is also ideally suited for use in marine environments. At home, we encounter bottles and plastic bags made of polyethylene of different densities (PET and LDPE), packaging made of bubble wrap (PVC) and polystyrene (PS and EPS), toys and furniture made of polypropylene (PP). All this is practical, has many advantages and one major disadvantage: if the material is not properly disposed of in the environment, it causes enormous damage there because of its durability. Especially in the sea.

How does plastic get into the sea?

Plastic granules are at the beginning of the processing process. Because of the pourability of the bulk material, many of the pellets, which are only millimeters in size, can already be lost during production and transport. They then end up in the environment even before processing begins.

The attentive beach walker will find white or colorful “grains of sand” on sandy beaches, which are plastic pellets that have washed up. They have been rounded by wave action and look confusingly like grains of sand.

Much more noticeable is the macro plastic trash that washes up on beaches or floats in the ocean. It has been transported from the mainland to the sea via rivers, blown from coastal landfills, intentionally dumped close to shore, or comes from offshore industry vessels and facilities that dispose of their waste cheaply but illegally at sea.

The European Mediterranean Sea is surrounded by densely populated coasts . Many unsecured landfills are located near the coast, in addition rivers transport waste from the hinterland into the sea. In a 2018 study, the environmental organization WWF surveyed the plastic waste load that rivers carry into the Mediterranean Sea . The leaders in the inglorious ranking: Nile, Ebro, Rhone, Po and the Turkish rivers Ceyhan and Seyhan. In the summer months, littering is further exacerbated by the millions of tourists who vacation in the Mediterranean . Plastic bottles and other macro waste cannot be overlooked on the beaches, but it is a different story with microplastic . Its existence is mostly not directly perceived by us, although it is abundant. 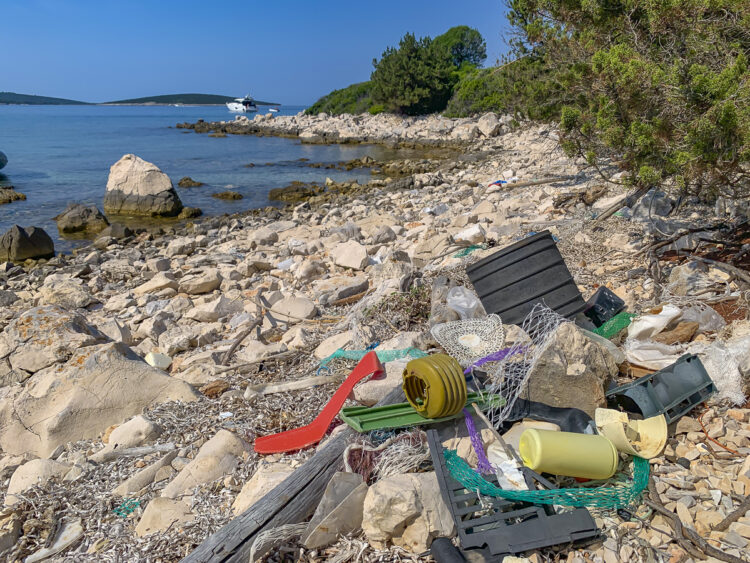 This term is proposed for a new geological era in which humans became one of the most important factors in biological, geological, and atmospheric processes on Earth . When and how could the beginning of this epoch be determined? The presence of radioactive dust after nuclear weapons tests, the appearance of concrete or of plastic are suggested as possible markers for the beginning of this era . We are all causers and eyewitnesses of this development, with the global omnipresence of plastic being particularly striking. From ocean coasts to the high seas, from deep sea trenches to Himalayan peaks, from the Arctic ice sheet to plankton communities, micro- and nanoparticles of plastic can be traced.

Clear legislation, waste disposal management and awareness raising will be essential to get the plastic tide under control. Making everyone aware of the urgency of the problem is probably the most difficult task. Two personal observations on a tourist resort in the Maldives: The “garbage ship “, which collects the island’s garbage once a month, has moored at the jetty, the collected garbage of the island is brought on board. One of the garbage men on board the ship unpacks his snack – and throws the packaging overboard into the sea. Obviously, he doesn’t have the slightest idea what he is actually here for and what his job would be. The island runs out in a beautiful long sandbank. Early in the morning, a worker collects the garbage that was washed up by the wind overnight on the windward side. The worker loads the trash, mainly plastic, into a wheelbarrow, crosses the narrow sandbar with it – and dumps the whole load into the sea, where the offshore wind blows it away from the island again. Mission accomplished, beach cleaned.

“Those I called, the ghosts, I can’t get rid of now.” The ballad of the sorcerer’s apprentice is often applied to the findings of science and their not always foreseeable consequences. The success story of plastic and the long-term consequences that are now becoming clear are a good example of this. In the meantime, we know that the circle has been closed: now the polluter, mankind, is also a sufferer. Microplastics accumulate in marine food chains and end up in the final consumer, in us. Babies may even be born with microplastics in their bodies, as microplastics have been detected in the placentas of some mothers. The health consequences are still unknown. Mare incognitum, the plastic tide is full of unanswered questions.

The case and keyboard of the laptop on which I am typing these lines are plastic. Where will all of this ultimately end up once I properly dispose of it? Text: Reinhard Kikinger | Photos: ocean7, SeaHelp | Source: ocean7