In many regions of Europe, it is currently exceptionally hot and dry. At the same time, the risk of forest fires is increasing in these areas; many fires have already broken out. Often, firefighting aircraft are the only “fire departments” that can extinguish fires over impassable terrain – from the air. How do firefighting planes (fireboats) work, and what do I do as a sport skipper if a firefighting plane unexpectedly appears nearby to take on water? SeaHelp informs.

No matter in which regions of Europe you are currently cruising, there is hardly a forest area that is not currently affected by acute fire danger. Many fires have already broken out and firefighters are in constant action, for example in France, Spain, Italy, Portugal, but also in Croatia.

When these natural refuges are adjacent to tourist hotspots, it can quickly become dangerous for people as well (see already our news report of 29.07.2022).

Only firefighting aircraft can get to fire sources in rough terrain

Often, firefighting aircraft, planes specially equipped with tanks to fight fires, provide the only way to get to the source of fires – such as those in rough terrain or forest areas – to extinguish the fires from the air.

Conventional fixed-wing aircraft are typically refueled with extinguishing agent prior to deployment. Flying boats (and amphibious aircraft, which can also be used as firefighting aircraft), on the other hand, take on firefighting water from a body of water while in flight – without having to land on the water in between.

The Canadair CL-215 was the first firefighting aircraft; it can land on land or water

The first aircraft designed specifically as a firefighting aircraft was the Canadair CL-215 by Bombardier; the most modern and widespread version of the Canadair specialized aircraft is called the Canadair CL-415 and has four fire tanks (unlike its smaller sister 215 T, which has only two fire tanks).

The flying boat, which was specially designed for aerial firefighting, can take off and land on land, but also on water, thanks to its amphibious chassis.

Unlike ground-based firefighting aircraft, Canadairs can touch down immediately after dropping their 6,000-liter water ballast over the fire on the nearest lake or ocean and take on new firefighting water while in flight.

Comparable to a foiling hydrofoil or a full glider, the aircraft then “slides” along the water at about 130 km/h (about 70 kn).

The actual intake of water during flight takes only about 12 to 14 seconds and takes place through filling tubes or flaps that dip into the water during the gliding process; helicopters take in the water in a special external tank while hovering.

This phase of the flight, when fresh firefighting water is taken on, is not without danger – the crew of the firefighting aircraft must factor the weather and conditions at sea into their maneuvers: how high are the waves, from which direction is the wind blowing? What is its strength?

It should also be noted that firefighting aircraft are several tons heavier immediately after taking on water, which makes them more cumbersome and slower to maneuver.

However, it is at least as important for the pilots to recognize in time flotsam or boats and yachts, which are in the area intended for firefighting water intake, because a collision of the aircraft with a boat or yacht at 130 km/h speed would have devastating consequences – for both, aircraft and boat. 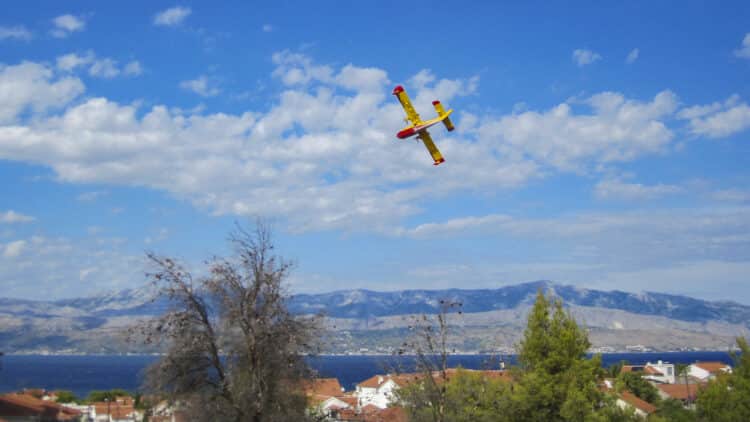 It is true that the pilots of the firefighting aircraft – in coordination with the authorities – will choose areas for their water shots where no yachts or ships are underway.

Nevertheless, recreational skippers and their crews would do well to stay away from, or promptly leave, sea areas where firefighting operations are being flown to be able to create a corridor for water pickup.

If in doubt, contact the local fire department to identify and avoid affected areas. Because in this case, the more boats and yachts are on the surface of the water intended for water intake, the more dangerous it becomes for pilots to fly these maneuvers or the more distant areas they must approach, which slows down and complicates firefighting.

The firefighting missions, as well as the affected areas at sea, can be reported to SeaHelp to alert other skippers in the region

If yacht crews spot firefighting aircraft and observe them picking up firefighting water at sea, it is a good idea to pass the coordinates through to SeaHelp. SeaHelp personnel can then immediately issue a warning for that area to eliminate or minimize collision hazards.