Autor: Matthias Müncheberg
Inhalt Anzeigen
1. The name Gromača has become established in Croatia for all types of dry stone walls
2. Gromačas are an expression of traditional architecture, bearing witness to the arduous daily life of the inhabitants
3. The walls were created when cultivation areas were created – and to “fence in” the plots
4. Mrgari, so-called “flowers of stone”, on the island of Krk represent a special feature
5. The “stone flowers” can be found on the southern part of the island of Krk in the highlands
6. On Hvar, Gromača between Stari Grad and Vrboska were built partly by Greek settlers
7. 2008 the Ager field of Stari Grad became UNESCO world heritage, reason were among other things also the dry stone walls
8. Houses, called trimas, were also built from dry stone without binders
9. Between the stones of the walls, many animals and plants find shelter

They are beautiful to look at, cover a total of many hundreds of kilometers, some of them are very old – and they are worth protecting: Gromačas, stone walls built by hand in painstaking dry construction in Croatia. But what is it about these picturesque structures, who built them and for what reason? SeaHelp went after this question.

In addition to gorgeous anchorages, beautiful beaches and cities with historically extremely interesting buildings, whose age partly reach into the Middle Ages, Croatia has much more to offer. Many Croatia vacationers know, for example, Vela Gromača on Krk, which translates into German as “Great Dry Wall”, which – along with the ruins of the church of St. Juraj – is an architectural feature on the island.

Vela Gromača is located not far from the village of Kras, on the highest peak in the municipality of Dobrinj called Kuševica (311 meters above sea level). Visitors reach the structure by following a marked path from the cemetery parking lot to the viewpoint, which is about 250 meters away. The local population of the Dobrinj area calls this area “Saint Juraj“.

Strictly speaking, Vela Gromača is not a dry stone wall in the traditional sense, but a large pile of stones hundreds of years old – which, however, was once built by hand by many people. Since then, the proper name Gromača has become common in Croatia for the designation of dry stone walls; the word vela means large.

Vela Gromača, the Great Cairn, which is located near the ruins of a small Romanesque church from 1230 and marked with a red sign, is not only pretty to look at; many visitors wonder what these stones, carefully stacked on top of each other without binders and forming elongated walls, are all about – who built them? When? And for what reason?

Gromačas are an expression of traditional architecture, bearing witness to the arduous daily life of the inhabitants

What is certain is that the dry stone walls, which can be admired in many places in Croatia in a wide variety of shapes and sizes, are an expression of autochthonous (traditional), folk architecture. The buildings, called by the locals only Gromača, are witnesses of the arduous everyday life of the islanders, which in the past was mainly characterized by agriculture and sheep breeding.

Many generations of people have created with their hands work from the stony soils little by little small fertile cultivation areas by digging the stones out of the ground one by one. But where to put all the larger and smaller, mostly white stones?

People came up with the idea of using these stones right away for fencing their small plots of land, so they didn’t have to transport the stones far away; they virtually “walled in” their plots of land, and without any mortar or other binding agents.

A positive side effect of this kind of “processing” of the many stones on the spot was and is that in this way it is prevented that the fertile earth is washed away by the rain right away, or that animals cause feeding damage to the few cultivable areas.

In addition, later entire pastures were “fenced in” in this way – there were enough stones. Finally, the stone walls also served as boundary markers of land ownership against the neighbors.

Mrgari, so-called “flowers of stone”, on the island of Krk represent a special feature

A peculiarity on the island of Krk are so-called mrgari – dry stone walls, built specifically for the temporary shelter and separation of sheep. These walls, also called “blossoms of stone”, consist of a central area, the large “hall” and, as in the case of a flower, smaller areas laid out all around (from the air actually reminiscent of petals), owned by different shepherds.

The mrgari were used in the form that all the gathered shepherds drove the sheep from the pastures towards the funnel-shaped entrance of the dry-stone walls. When all the sheep were gathered in the “hall”, the entrance was closed and each shepherd could now calmly separate his own sheep, enclosing them in his own small dry-stone wall.

After shepherds sheared their animals, they were simply let back to pasture by opening a small gate on the outside.

The “stone flowers”, which are otherwise known only from Iceland and Wales, can be found in Croatia only on the southern part of the Island of Krk. They were built long ago by shepherds from the valley of Baška, mainly sheep farmers from the villages of Baška, Batomalj and Jurandvor. Ten dry-stone walls of this type are known today, five on each highland, and five more on the neighboring island of Prvić.

On Hvar, Gromača between Stari Grad and Vrboska were built partly by Greek settlers

Also on the island of Hvar there are many dry stone walls, which were built by several generations with painstaking manual labor. Mostly this was done there to create cultivation areas for olive trees in barren areas.

But dry-stone walls are also said to have a long historical significance: the Gromača on Hvar between Stari Grad and Vrboska are said to have been built at least partly by Greek settlers (from 344 BC) as plot boundaries – strictly rectangular.

Here, too, they got rid of the many stones elegantly at the same time and were able to create clean cultivation areas (for example, to plant lavender) and walkable stone ramparts along the way.

2008 the Ager field of Stari Grad became UNESCO world heritage, reason were among other things also the dry stone walls

The authenticity of the Greek land division system, known as chora, is evident throughout the plain. The built structures of stone walls are authentic, using and reusing the same basic materials for dry stone walls since the foundation by the Greeks.”

Whole houses were also built without binders from dry stone. The so-called trimas are simple round houses whose roofs are made of thin stone slabs laid on top of each other.

Incidentally, the old dry stone walls and stone ramparts can be distinguished from the newly constructed gromačas even by laymen: the older stones show increased signs of erosion and are sometimes dark gray in color.

Many people have recognized the architectural value of the dry stone walls and want to preserve and maintain this cultural heritage. For example, a few years ago, specifically in November 2014, there was already a so-called educational weekend on the Riviera of Crikvenica, title of the (free) workshop: “Preservation of dry stone walls in Kotor”.

Between the stones of the walls, many animals and plants find shelter

However, the dry stone walls have a significance not only for the people, of which people all over the country are gradually becoming more and more aware. Many animals and plants have also sought – and found – shelter between the stones of the walls. Snakes, lizards and insects use the structures as welcome dwellings. In turn, many species of birds and bats live near the Gromačas, feeding on the insects. 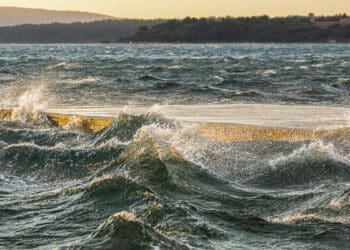