29.07.2022
in News General
|
Update: 29.07.2022
|
Autor: Matthias Müncheberg
Inhalt Anzeigen
1. In recent weeks, the Italian fire department deployed 4,000 times more than in the same period last year
2. A major fire kept about one hundred firefighters busy in Tuscany, west of Lucca
3. Firefighters are also in constant action in Croatia; forest fires raging in many Adriatic resorts
4. In Zaton, several houses had caught fire, with thick smoke over the town at times
5. What should you do in the event of a forest fire? The right behavior in a forest fire can save lives
6. Smaller fires can be fought by yourself – but your own safety should always be a priority
7. Whoever wants to report a fire, it is best to contact the local fire or police station – with as specific information as possible

In many regions of Europe, it is currently exceptionally hot and dry. At the same time, the risk of forest fires is increasing in these areas; many fires have already broken out. How do I behave if I am surprised by a forest fire during a hike? SeaHelp informs.

No matter in which regions in Europe you are currently on the road, there is hardly a forest area that is not currently affected by acute fire danger. Many fires have already broken out, the firefighters are in constant use, for example in France, Spain, Italy, Portugal, but also in Croatia. When these natural refuges are adjacent to tourist hotspots, it can quickly become dangerous for people as well.

The situation is frightening, and there is no calming in sight. On the contrary, if temperatures remain at the current high level, and if it stays dry in parallel, the risk of forest fires will continue to increase.

This summer, for example, the Italian fire department had to go out significantly more often because of forest and bush fires than a year ago, according to a dpa report. From June 15 to July 21, more than 32,900 operations were counted nationwide, about 4,000 more than in the same period last year.

So far, firefighters have had to intervene most frequently in Sicily and Puglia. Meanwhile, the authorities also lamented a first fatality of the forest fires: a policewoman and civil defense employee died Thursday in the municipality of Prepotto on the Italian-Slovenian border east of Udine during firefighting operations.

The report added that extensive forest fires had been blazing for days in the border area of the Italian region of Friuli-Venezia Giulia in various places, such as near Monfalcone south of Gorizia, prompting authorities to temporarily close a section of highway and part of a train line.

A major fire kept about one hundred firefighters busy in Tuscany, west of Lucca

A major fire also kept about one hundred firefighters busy in the Tuscan municipality of Massarosa, west of Lucca, he said. In that area, several hundred people had been pulled from their homes to safety from the flames, regional president Eugenio Giani warned, adding that the danger was not over yet.

In the northern Italian autonomous provinces, too, the authorities had been repeatedly reporting forest fires for days, as in South Tyrol or Trentino. Italy has been experiencing extreme drought for months, so flames could always spread rapidly on the dry soils. Often, he said, negligence or arson are behind the fires. In addition, he said, the wind often fuels the flames. 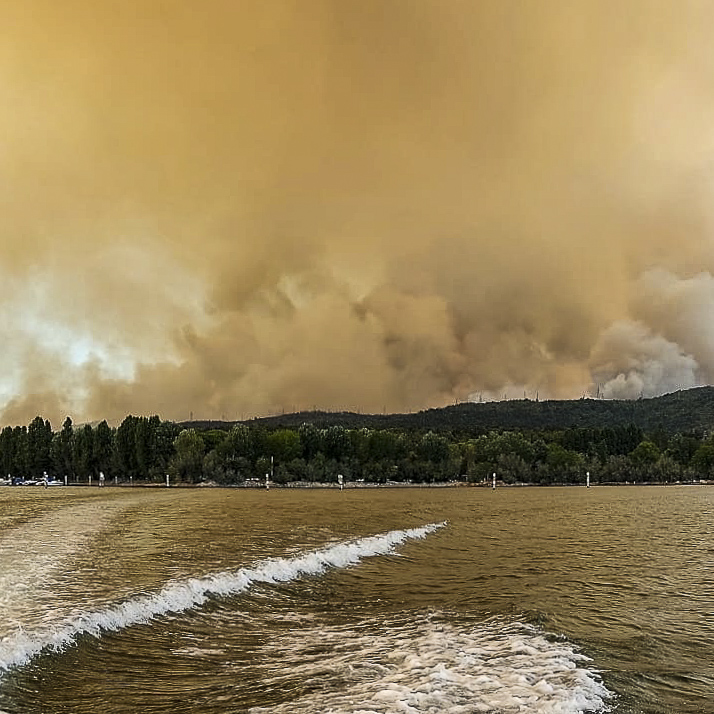 Firefighters are also in constant action in Croatia; forest fires raging in many Adriatic resorts

Firefighters in Croatia are also in continuous operation due to the heat wave and exceptional drought, according to the staff of SeaHelp bases there. In many places, several forest fires were already raging on the Adriatic coast as well – and that in the middle of the peak tourist season.

The situation has been most dramatic in recent days near the Dalmatian town of Sibenik on the Krka Riviera, they said. Seaplanes and dozens of firefighters have been in constant use here to contain the flames.

Residents of Zaton and Raslina were ferried to safety by boats across Stubalj Bay, reports said; the situation was “worse than it had been in a decade,” Danijel Mileta, head of Sibenik’s Civil Defense, was quoted as saying.

In Zaton, several houses had caught fire, with thick smoke over the town at times

More than 100 firefighters with 42 fire engines were on duty, writes the news portal “sibenik.in”. In der Ortschaft Zaton had then at times downright panic prevailed, as several houses had caught fire, and thick clouds of smoke had settled over the place.

Just last weekend, a fire near the city of Pula on the Istrian peninsula had destroyed 40 hectares of vegetation. Near the central Croatian town of Novak, a 15-hectare oak forest had also been in flames over the weekend.

It was further reported that the fire department had used helicopters in addition to vehicles to extinguish the fire. On the Adriatic island of Brac there was also a fire; the trigger, according to Croatian media reports, was a burning car on the side of the road. 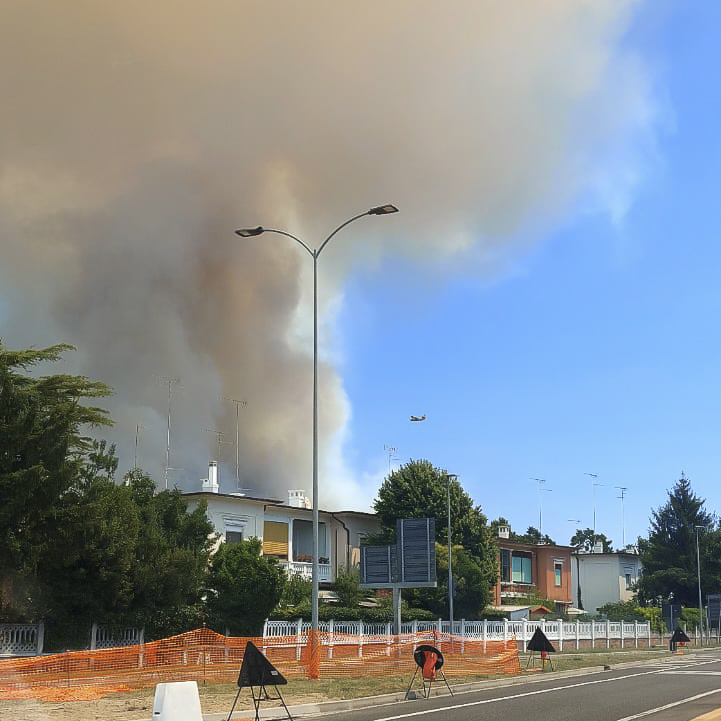 The experts from the International Civil Protection Germany have collected a lot of information on forest fire knowledge on your website. Anyone who is surprised by a forest fire outdoors, for example during a hike, should first remain calm and move sideways to the wind direction away from the edge of the forest.

Afterwards, one should protect oneself from flying sparks with a head covering and sunglasses, and against smoke one can hold a damp cloth in front of the mouth.

In general, he said, in the event of a fire, people should flee to a wooded area with as little vegetation and combustible material as possible, leave slopes and move as far as possible to the side away from the fire.

For smaller incipient fires on the ground, you can try to extinguish the fire yourself, according to the Federal Office for Civil Protection and Disaster Assistance. But: your own safety should always come first.

Smaller fires on the ground can simply be extinguished. However, sturdy shoes, long pants and long-sleeved cotton clothing are mandatory. Fire places could be covered with sand, gravel or earth. If available, fire extinguishers should be used.

Because it is very difficult to transport enough extinguishing water to the fire site, aerial firefighting aircraft often support the firefighters on the ground by dropping large quantities of water. Caution: sometimes firefighting water also contains chemical additives that aid in firefighting. 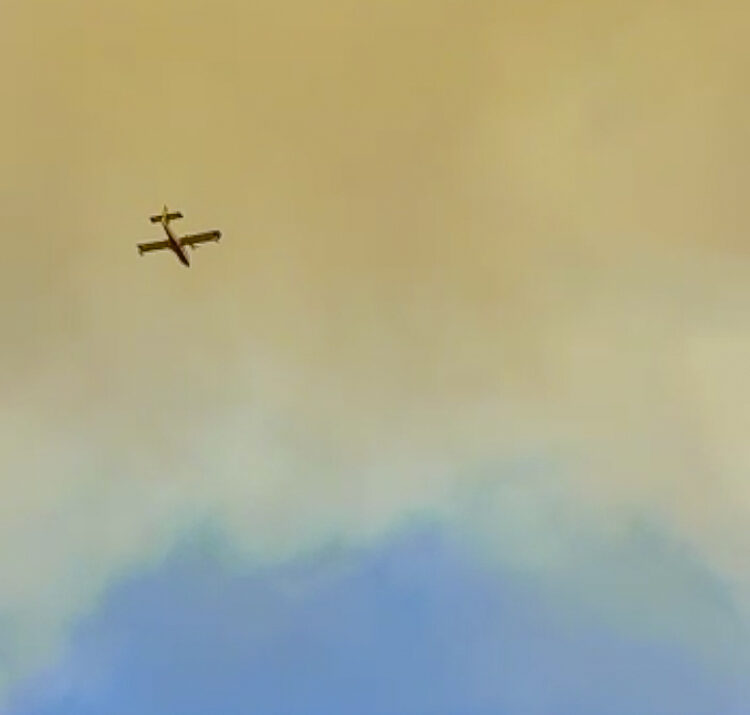 Whoever wants to report a fire, it is best to contact the local fire or police station – with as specific information as possible

You can also contact the SeaHelp helpline at any time in the event of a fire; our staff will then immediately take all further necessary steps.