Autor: Matthias Müncheberg
Inhalt Anzeigen
1. In Germany, there will soon only be international nautical charts in DIN-A0 format and national charts in DIN-A1 format
2. The BSH nautical chart series is part of the worldwide IHO standard and has double numbering
3. Nautical charts must always be kept up to date – through new purchases or corrections
4. Also in Croatian waters, in addition to certain documents, nautical literature appropriate to the sea area must be carried
5. Official Croatian charts are published by the HHI; these can also be corrected by yourself
6. All info on rectification of Croatian (paper) nautical charts is available on the Internet at hhi.hr
7. New edition available soon: the “Beständig”, a standard work of nautical literature for Croatia

Sport skippers should always have up-to-date nautical charts on board. In addition to electronic charts, these do not always have to be new (paper) charts; it may also be worthwhile to correct older material. This also applies to Croatian waters. SeaHelp explains what should be paid attention to.

For Germany, the situation is straightforward: the Federal Maritime and Hydrographic Agency (BSH) produces paper nautical charts for the area covered by the Seeschifffahrtsstraßen-Ordnung (SeeSchStrO). This includes rivers, the territorial sea as well as the German exclusive economic zone, including the partly adjacent areas of neighboring countries.

All paper nautical charts of the BSH are structured according to the international charting standard Chart 1 / INT 1. It is an integral part of the standard S-4 (Regulations of the IHO for international (INT) charts and chart specifications of the IHO). Official nautical charts must conform to certain recognized standards to ensure safe navigation in shipping and to meet legal requirements.

To this end, recreational skippers must always use the latest editions of nautical charts and sea books, continuously correcting them and thus keeping them up to date. All changes that have occurred after the publication of a nautical chart or a sea book can be found (for Germany and adjacent waters) in the Nachrichten für Seefahrer (NfS). They contain corrections and reports on measures and events of larger scale or supraregional importance.

The NfS correct the latest editions of the official German nautical charts and nautical books listed in the Catalog of Nautical Charts and Books. They also contain notices and regulations issued by authorities, insofar as they are of importance to ship navigation or are required by law. The NfS are published weekly in both printed and digital form.

Also in Croatian waters, in addition to certain documents, nautical literature appropriate to the sea area must be carried

Furthermore, a proof of ownership or certified power of attorney, a boat license, the passport or ID card and, if applicable, proof of paid sales tax (T2L paper or original invoice) can be shown.

Finally, appropriate nautical literature suitable for the sea area should also be carried. In addition to port manuals and an Adriatic nautical guide, this includes, first and foremost, up-to-date charts. These are available either in electronic form – or as paper charts (note: the paper charts are the “official” charts, not the digital charts!).

Official Croatian charts are published by the HHI; these can also be corrected by yourself

Note that the sport boat charts for Croatia published in Germany e.g. by Delius-Klasing (Adria I + II, 3 Übersegler and 25 Revierkarten, new as of March 2023, available e.g. from DK direkt or Hanse Nautic) are not considered “official” nautical charts; the “official” Croatian charts of the HHI (Hrvatski Hidrografski Institut) are available e.g. from Freytag & Berndt (Croatia total, 29 charts).

But what if you already have Croatian maps, e.g. from your last vacation or the one before last? Can these be corrected just like their German counterparts? The answer is yes – if you know how!

Although until a few years ago there was an overview map with the annually new Croatia vignette (No. 101, can currently be purchased in nautical stores), this should not be used for navigation. Rather, the official Croatian nautical charts should be used. If you want, supplement older charts as follows:

All info on rectification of Croatian (paper) nautical charts is available on the Internet at hhi.hr

First open the official website. In the menu first select the item “e-Services”, then the sub-item “Notice to Mariner (NTM)”. Now a table opens, you go back to the creation date of your respective paper chart (date is noted on each chart) and perform the “Male Korrekture” yourself.

To do this, open the respective PDF (available in English and Croatian), and change or add to the respective document according to the instructions of the HHI. After the correction, the keyword “Male Korrekture” as well as the date and the signature of the corrector should be noted on the respective card.

In January 2023, the new edition of the popular standard work 888 ports and bays – Croatia, Montenegro and Slovenia with 760 plans and 46 maps.

While this is a reliable reference book that explains local conditions, it should be expressly noted that the “Beständig”, as this nautical guide is also fondly called, does not replace nautical chart books. 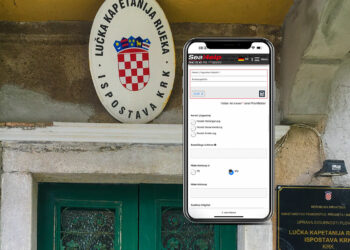