Fire, Guide, on board

Home > Guide > Fire on board: Which extinguishing agents belong on the yacht

21.06.2022
in Guide
|
Update: 21.06.2022
|
Autor: Matthias Müncheberg
Inhalt Anzeigen
1. Which fire extinguisher to use depends on what (which substance) is burning
2. So-called ABC extinguishers are suitable for many fires, are inexpensive and last a long time
3. Inside, a foam extinguisher is recommended to minimize consequential damage
4. Fat fire extinguishers are mostly used in the kitchen (galley)
5. CO2 extinguishers leave no residue and are gentle on technical equipment
6. For voyages in international waters, MED certification of the extinguishers is recommended
7. Statistically, SeaHelp research shows that fires most often occur in the galley
8. When there is smoke from the engine room, prudent action is required – a deflagration is imminent
9. If help is needed in the event of a fire, the SeaHelp app
10. The overriding principle is self-protection; in case of full fire, the yacht should be isolated, if possible
11. Caution: the operating time of a fire extinguisher is very short. The rule is: aim first, then release.

It’s a nightmare for every yacht owner: a fire on board is one of the most dangerous accidents that can happen at sea, because fires on ships often spread quickly. Compared to land, firefighting is more difficult: there are no escape routes, and there are often still people on board. Quick action is required, and the yacht should be equipped with the appropriate fire extinguishers. SeaHelp gives an overview.

Generally speaking: carrying a fire extinguisher is not mandatory for all ships and boats. Especially in the private sector, the obligation to equip with fire extinguishers applies only to boats with built-in engines over 6 hp or external engines over 10 hp. This also applies if cooking and/or heating devices are present.

In Germany, for example, fire protection for large and commercially used vessels is regulated by the Binnenschiffsuntersuchungsordnung, the Seeschiffstraßenverordnung and the International Convention for the Safety of Life at Sea (SOLAS).

Different types of fire extinguishers are suitable for optimal fire protection in shipping. How best to extinguish a fire – and with what – depends primarily on what exactly is burning. For this reason, fire extinguisher fire classes are noted.

Class A stands for ember-forming substances such as wood, B identifies flammable liquids, especially fuels such as gasoline or diesel, and F is relevant for burning fats (for example, overheated frying fat in a pan). Important: Fats cannot be extinguished with water; here, the first choice is a fire blanket.

So-called ABC extinguishers are suitable for many fires, are inexpensive and last a long time

For all other fires, so-called ABC (powder) extinguishers are suitable. Advantage: the universal extinguishers last very long, they are cheap to buy and – if used correctly – also very effective.

Disadvantage: the fine powder penetrates when spraying in every even so small crack; if you have successfully fought the fire, often remain accompanying and consequential damage, which can be considerable. It should also be noted that the powder can attack metals, as it contains salts, this can have a negative impact on the onboard electronics or electrics on the yacht.

Inside, a foam extinguisher is recommended to minimize consequential damage

The foam can be wiped off surfaces, which protects the interior furnishings of the ship. The ABC powder extinguisher, on the other hand, is well suited for the deck.

ABC extinguishers are available as charging and continuous pressure extinguishers. They have the advantage that they are frost-proof to minus 30 degrees and additionally cover fire protection class C. This makes a powder extinguisher generally suitable for outdoor areas on board, where it can sometimes get very cold.

Fat fire extinguishers are mostly used in the kitchen (galley)

However, according to SOLAS regulations, it is also mandatory to carry an extinguisher of fire class F for engine rooms. On sport yachts, this area will mostly be limited to the stove in the galley, where oil that has become too hot ignites. But even here, the fire can spread quickly, for example, by jumping to curtains or towels.

CO2 extinguishers leave no residue and are gentle on technical equipment

However, the CO2 extinguisher must not be used in rooms that are too small, as the carbon dioxide also displaces the oxygen from the breathing air. Care should be taken here. So-called fire ports, special extinguishing openings into which the gas can be sprayed, have proven to be advantageous. Disadvantage: CO2 does not cool the source of the fire.

For voyages in international waters, MED certification of the extinguishers is recommended

In principle, all the types of extinguishers presented represent a good basis for fire protection in shipping. Should international waters be navigated, the fire extinguishers should be MED – certified. These extinguishers meet the construction and quality requirements of the Marine Equipment Directive (MED).

They are recognized throughout the EU and, through an agreement with the USA, also in American waters. However, declarations of conformity for these extinguishers should be carried to avoid possible fines. It is easy to tell if a fire extinguisher has MED approval by the fact that it is marked with a control wheel symbol.

Statistically, SeaHelp research shows that fires most often occur in the galley

The German Federal Office of Transport and Digital Infrastructure recommends carrying at least two portable NBC fire extinguishers – in addition to the minimum equipment. For larger vessels, it is also advised to install one extinguisher each in the forecastle, cockpit and galley to minimize necessary walking distances. A fire blanket is an additional effective tool to extinguish small fires and incipient fires.

“Statistically, fires in kitchen areas (pantry) and faulty electrical installations are the most common causes of fire”, says SeaHelp operations manager Marko Orlic. In the kitchen, therefore, a fire blanket should always be ready for use and within reach. Boat heaters in the winter months also caused fires, followed by fires in the engine compartment. 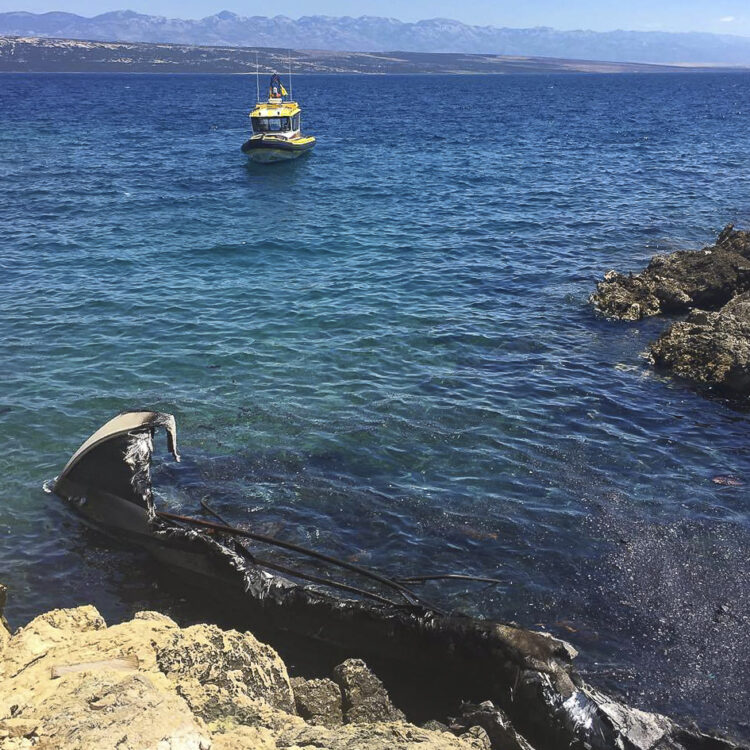 When there is smoke from the engine room, prudent action is required – a deflagration is imminent

“If there is smoke coming from the engine compartment, the crew should not make the mistake of opening the compartment immediately”, advises the rescue professional; the rapid supply of oxygen could lead to explosive ignition. As for the electrical system, electrical equipment is often retrofitted on yachts, but without taking into account that other wiring would then be required; cables could also corrode over time.

“If there is a fire outbreak on a yacht, it should first be quickly clarified what (which substances) are actually burning, in order to then select and use the appropriate fire extinguisher for it,” says Marko Orlic. Often the intervention speed is decisive for whether the fire can spread – or not. 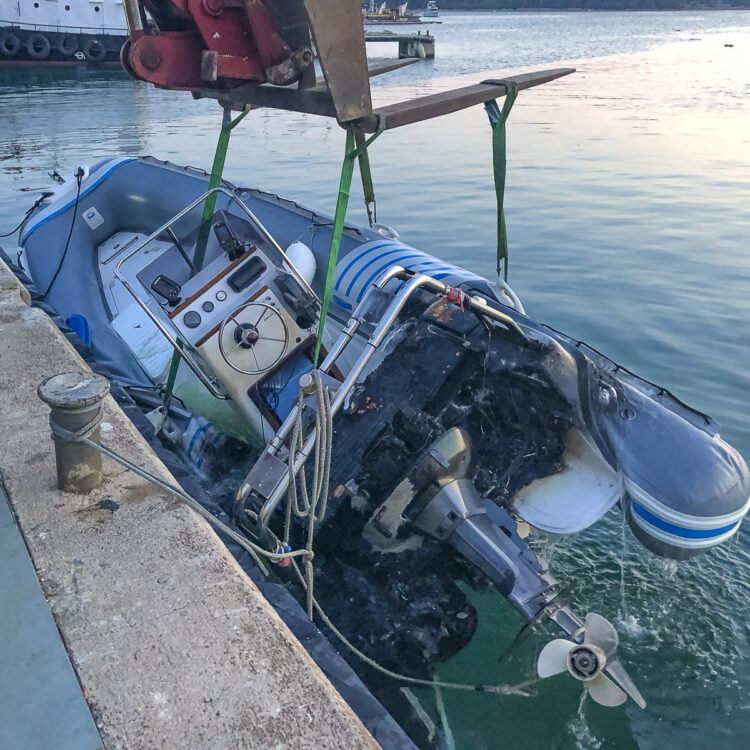 If help is needed in the event of a fire, the SeaHelp app

is recommended.
Marko Orlic of SeaHelp advises: “The next step should be to cut off the supply of fuel, gas cylinders should be sealed and electrical (main) switches should be turned off. If the fire threatens to get out of control, rescue services should be alerted immediately, here the SeaHelp app helps and saves valuable time”.

It is important not to panic in the event of a fire on board, in order to to be able to call professional help quickly, to be able to start your own attempts to extinguish the fire first (in case of smaller flames or little smoke formation) and to be able to evacuate the crew immediately, if necessary.

The overriding principle is self-protection; in case of full fire, the yacht should be isolated, if possible

The overriding principle, he said, is not to put yourself in danger. Orlic: “If you only call for help and otherwise do nothing, the fire on board may spread very quickly”, then it can quickly happen that any help comes too late. In this case, it may be useful to move the boat specifically to open water to prevent the flames from spreading to other yachts or harbor buildings. 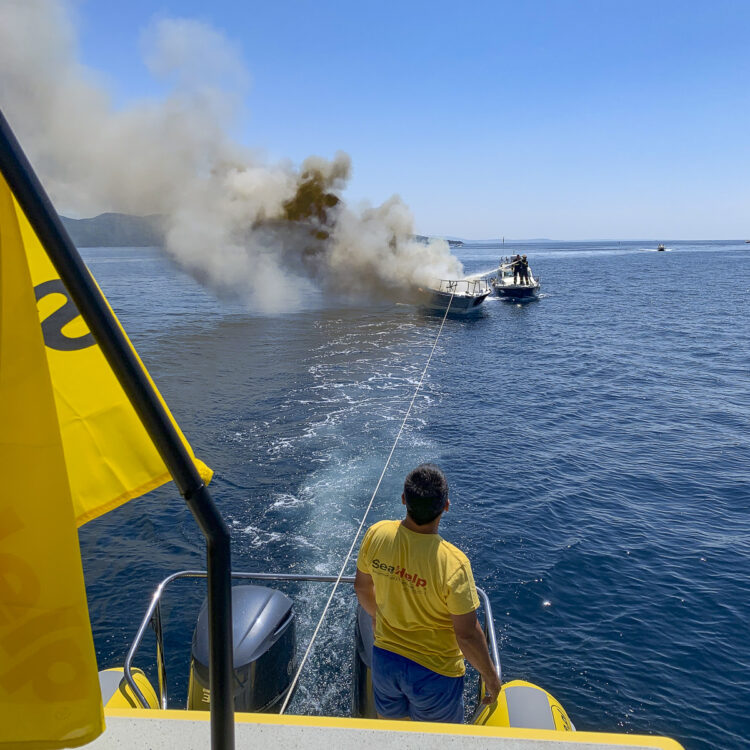 Skipper and crew should already deal with the fire extinguishers on board in advance – information is provided by the labels on the containers. Also the handling should be rehearsed before the emergency, many companies, but also clubs and associations as well as the fire departments offer so-called fire extinguishing training, which is even mandatory for certain offshore regattas for part of the crew.

Caution: the operating time of a fire extinguisher is very short. The rule is: aim first, then release.

And: if a fire extinguisher is used to fight the fire, it should also be taken into account that the “operating time” of a normal extinguisher can sometimes be very short (often only a few seconds), which means that you should “aim at the target immediately” when the extinguishing process is started. 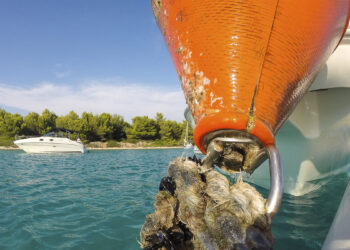 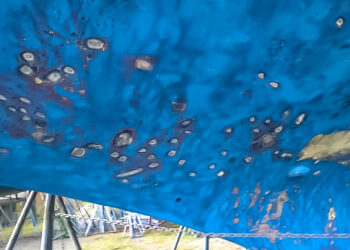 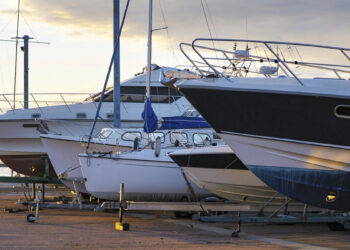 Customs regulations: Import duties when buying a boat – What to look out for.