Home > News General > From 23 August 2021 also in transit: To travel through Slovenia may only those who are vaccinated, recovered or tested.

From 23 August 2021 also in transit: To travel through Slovenia may only those who are vaccinated, recovered or tested.

16.08.2021
in News General
|
Update: 16.08.2021
|
Autor: Wolfgang Kröger
Inhalt Anzeigen
1. 3-G rule for transit Slovenia postponed to August 23
2. Many tourists affected by transit – restrictions
3. Children who have not reached the age of 15 are not affected
4. German return travelers also require test
5. Even Slovenian tourist office knew nothing
6. Testing must take place in Croatia
7. Slovenia will control
8. Map of international border crossings

For Croatian holidaymakers traveling to the country on the Adriatic Sea in their own cars, the following will apply from Monday, August 23, 2021: anyone choosing the route through Slovenia for transit must comply with the 3-G rule, i.e. be vaccinated, tested or recovered. It can be assumed that Slovenians at border stations will check this not-so-new rule accordingly when leaving Croatia. The possible consequences range from rejections at the border to hefty fines during controls in the interior of the country. Affected by the measure are all holidaymakers who are currently in Croatia and leave the country from 23 August, 00.00 h via Transit Slovenia. So anyone who is not vaccinated or recovered should take one of the testing centers in Croatia before traveling, and only check in with a antigen test, not older than 48 hours or a PCR test, not older than 72 hours to exit Croatia to the Slovenian border.

Back in July, SeaHelp reported on Slovenia’s “last minute action” to require appropriate testing for transit on very short notice. Due to an intervention of the Croatian tourism industry, it was possible to obtain a four-week postponement for this measure, which, however, was supposed to end on August 15, 2021. Now, however, the new transit regulation has once again been extended at short notice by one week. This measure, which was only announced on the evening of August 14 on the part of the Slovenian government at more than short notice, may still have been published differently in other media. Also the ÖAMTC communicates the but already the correct date. Nevertheless, there is a risk that many vacationers as well as boat and yacht owners may not have paid attention to this important message due to the large number of partly very short-term messages, regulations, bids and bans.

Many tourists affected by transit – restrictions

It is undisputed that both in Germany and Austria the vaccination rate is correspondingly high with more than circa 50%, but in Croatia tourism is booming, currently the official agencies count well over a million visitors. If you subtract those who have already been vaccinated or recovered or arrived by plane, there still remains a not insignificant number of vacationers who would actually need a test for the return trip from Croatia, or for transit through Slovenia.

Children who have not reached the age of 15 are explicitly not affected by this regulation.

Incidentally, German travelers returning to Germany must also be in possession of a valid antigen test when entering Germany already at the border, otherwise a fine of between 250 euros and 1,000 euros per person is threatened when occasional controls are carried out, as the Bavarian Ministry of Health once again informed SeaHelp editors upon request. Likewise the Pressestelle of the Bavarian Ministry of Health denied that one can be tested also still after border crossing in Germany, in order to avoid a fine in sensitive height. Such statements have already appeared sporadically in forums, we went to the bottom of their truthfulness.

Even Slovenian tourist office knew nothing

“The introduction of the 3-G rule for transit through Slovenia was postponed for a month due to the relatively short notice and the planned quick implementation, so that Croatia vacationers can prepare for it in the longer term when they return,” said the Slovenian Tourist Office in Munich still on the occasion of an inquiry of the SeaHelp editorial staff on Friday afternoon. Further one seemed to be safe: “We exclude state today that the issued regulations are changed however again.” Apparently, staff had been surprised by the yet another last-minute change themselves, because now the regulations will not apply until August 23, 2021.

Testing must take place in Croatia

.
In plain language, this means, as already stated at the beginning: Anyone who is not vaccinated or recovered and can prove this accordingly will need a valid test when transiting Slovenia from August 23, 2021. The possibility to get tested exists in Croatia to a sufficient extent. But beware: Austrians who were able to have a test performed in Austria after returning from their vacation in Croatia must already have themselves tested in Croatia when the new regulation comes into effect if they are not vaccinated or have not recovered. For German vacationers, this regulation has already been in effect for longer.

Those who start their return journey from Croatia in their own vehicle from Monday, August 23, 2021, should allow a little extra time at the Croatian-Slovenian border, at least on the first days after the 3-G rule for Slovenia transit comes into force, because checks are to be expected. 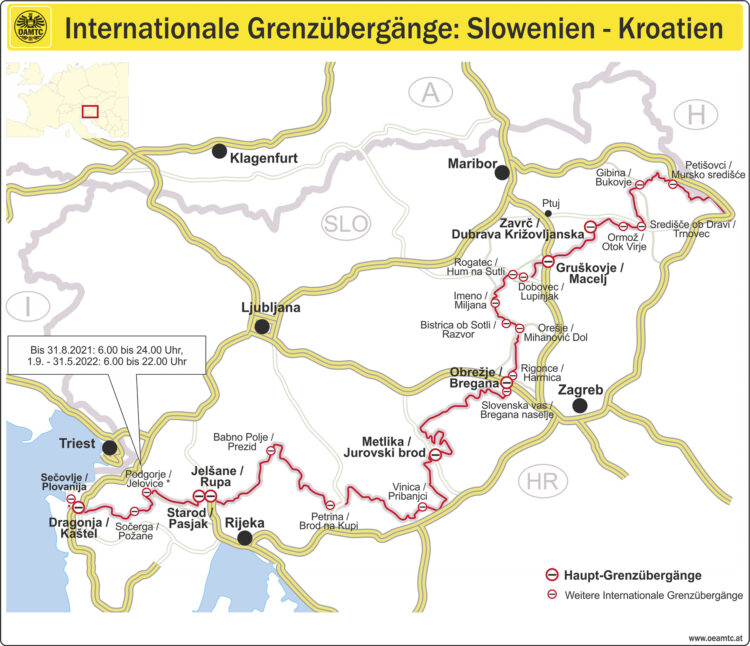