Power Management: Power consumption on board

Autor: Matthias Müncheberg
Inhalt Anzeigen
1. Rule of thumb: motor at least five hours a day to charge the batteries
2. Only those who regularly check the voltage know their consumers on board
3. The lion’s share of power consumption on a yacht is usually the refrigerator
4. If the voltage is too low: full charge with shore power!
5. Guide values for the power balance of individual consumers
6. Saving electricity is the number one motto on board
7. Saving LED lights on board can help reduce energy consumption
8. Free for SeaHelp members

If you are going on a trip with your yacht, you should be familiar with your boat, the traffic rules, navigation and the weather. For sailors in particular, it is also essential to be familiar with the power consumption on board if the trip is to be a success.

Many charter skippers are not sufficiently aware of the fact that normally there is much less electricity available on board a yacht than at home or in general: on land. Especially when it is uncomfortably cold outside and the diesel auxiliary heater is running often and for a long time, a lot of additional electricity is consumed.

Especially on sailing yachts, this can quickly lead to problems – particularly if it is a longer trip, anchoring in a quiet bay or long night strokes are undertaken under sail, because: when sailing, navigation devices such as chart plotters and autopilots still require 100 to 150 watts (so 8 to 12 amps). If then in the darkness additionally the Navi lighting is switched on, 10 to 15 amperes come fast in addition.

Rule of thumb: motor at least five hours a day to charge the batteries

As a rule of thumb, if you motor for five hours or more a day at medium speed, you should – depending on the technical equipment of the yacht – have charged your batteries sufficiently (with about 250 amps, depending on the engine/alternator and batteries) to be able to use normal consumers on board for a while. In general, however, you should call at a port with a shore power connection every two to three days to fully charge the batteries again, unless the yacht is equipped with power generators.

But when are batteries actually “sufficiently” charged and what does “normal consumers” mean? Here it makes sense to deal with the concrete voltage / volt or consumption situation on board once before the start of the trip and to draw up a small “energy balance” (for example, in simple table form) – to prevent unpleasant surprises during the trip in time.

This could look like this: when the yacht is disconnected from shore power, after about ten to 15 minutes the voltage/volt of the consumer battery should be read and noted. Depending on the battery type, this voltage/volt may be between 12.2 to 14.4 volts – value of the “full charge” of the batteries.

After an hour of sailing or a swim stop, the voltage should be checked again to correctly estimate the voltage loss. This should become a routine on board, because only if the voltage is checked regularly, it is possible to estimate which consumers on board are loading the batteries. 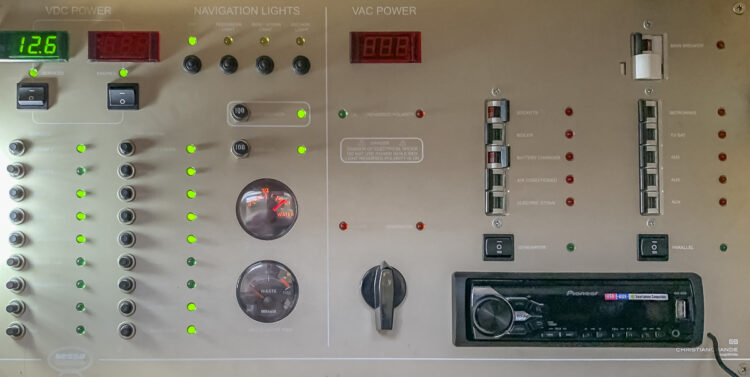 By the way, the lion’s share of electricity consumption on the yacht is usually the refrigerator. The consumes on average about 100 watts (eight amps per hour), and often runs through on hot summer days. This means that this consumer alone draws up to 120 amps from the batteries. Small consolation: modern on-board refrigerators often switch off at about 11.8 volts, so as not to overload the batteries.

The number of crew/people on board should also be considered when looking at the energy balance on board. How often is the refrigerator opened, how often do the guests shower off with fresh water after swimming in the sea? On an average summer day, you should generally calculate with about 100 amps for basic needs plus about 40 amps per person. Based on that, for a yacht with a crew of four, the main engine with its alternator should be able to replenish consumption after about five hours at medium speed, or a 70-amp charger after about four hours of shore power (or via the power generator).

If the voltage is too low: full charge with shore power!

In the evening before going to bed should be fully charged again. Typically, the engine or power generator is then charged in the morning until the consumption of the previous night is compensated. If the voltage drops to such a low level that the refrigerator automatically shuts down, a 12-hour charge with shore power should be used to bring the batteries back to normal voltage.

But what happens if, during the same period, the dishes are also washed (drinking water pump, water heater), the heating is switched on because it is uncomfortably cold and damp outside, the bilge pump is possibly used, and the electric toilet flush is also regularly used? In this case, the exemplary 280 amps are consumed very quickly – the batteries are empty. 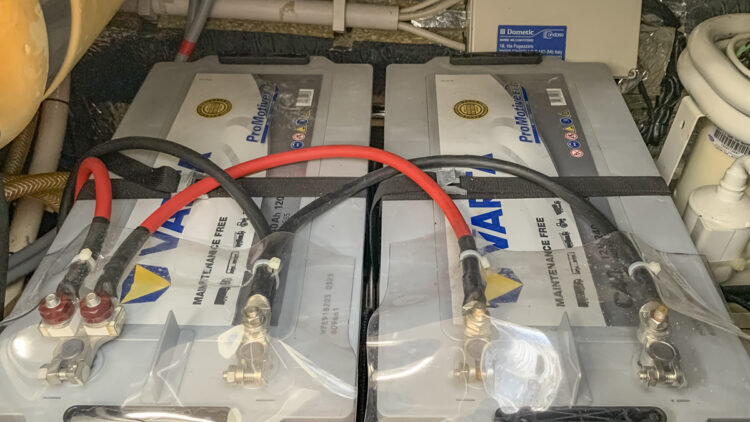 Guide values for the power balance of individual consumers

Here are a few rough guide values for orientation:

Saving electricity is the number one motto on board

For this reason, you should consider in advance whether (especially at night), for example, the heating is to be used – in some circumstances, it then makes sense to visit a port and use shore power. The general rule on the water is: Saving electricity is the top priority on board. There are many ways to do this: For example, only as much light should be switched on as is actually needed (no “fixed lighting”). Televisions and other technical devices should not be in standby mode, which also saves energy! It should also be ensured that the refrigerator door is always well closed. The heating should only be used briefly to warm up, etc.

Even those who have one or more generators on board will strive to run them as seldom as possible in order to save fuel and not cause unnecessary noise and exhaust emissions, especially at night or in a dreamy, natural anchorage. Here, too, therefore, the rule is to save electricity – if necessary in conjunction with alternative power generators such as solar panels on board. Some shipyards are already experimenting with fuel cells on board for power generation.

Saving LED lights on board can help reduce energy consumption

However, this will remain a thing of the future on charter yachts for a long time to come. Therefore, the following applies: Establish energy balance and save electricity can already help immensely in normal cases. Because the alternator of an engine supplies (in the ideal case) only about 55 Ah. By the way: A good on-board power supply also helps save electricity, as do cables laid on board that have a sufficient cross-section (higher resistance and voltage drop with cables that are too thin). And those who often go night cruising should think about replacing their conventional lanterns with modern and much more economical LED lamps (Caution: subject to approval)!

If the batteries should be surprisingly empty despite all precautions nevertheless once – no problem: with starting problems each SeaHelp member at the average place free starting assistance by means of foreign current cable or Jump starting box is furnished. Even beyond that, a SeaHelp membership offers all-around protection for related problems, such as fuel service or spare parts delivery. The SeaHelp Emergency Call App can be used to inform the operations center quickly, easily and reliably.