Home > News General > Shoal on the Italian Adriatic coast: Warning of shoaling near Lignano: so skippers are on the safe side

Shoal on the Italian Adriatic coast: Warning of shoaling near Lignano: so skippers are on the safe side

Lignano, which stretches in the form of a peninsula across the northeastern half of the Tagliamento Delta between the Marano Lagoon and the open Adriatic Sea, is popular with recreational skippers. The flat landscape was a marsh until a few decades ago, which also requires circumspection when passing through the surrounding waters because of some flax.

A SeaHelp member told us that there is currently a shoal in the channel exit at Lignano (45°41’45.1 “N 13°09’30.8 “E) (Lignano side), where he himself ran aground with his 1.65-meter-deep boat in May; when he returned in June, another sailing yacht ran aground in the same spot through no fault of his own and had to be towed free.

The shoal at Lignano is about 1.3 meters deep and should be avoided

The SeaHelp member stated the shoal was 1.3 meters; for them it had come “suddenly and unexpectedly”, “in a situation where they thought they were on the safe side” in the channel.

Those heading for Lignano would do well to steer a course between 0 and 10° from the outer buoy of Lignano, even outside the channel, and to leave the green bricole on the left, “more or less halfway along the channel”. When leaving Lignano, steer a course between 170 and 180° from the green access light (whose depth under the light sign is eight meters), towards the buoy, and then pass the green bricole, advises the SeaHelp member.

Caution: the route is also used by local fishermen, caution is advised

In this context, it is important to note that the route described is also used by local fishing boats, so special caution is advised. The SeaHelp member recommends not to go near the red bricols, especially not near the red area shown in the picture (some bricols would be missing in this area, moreover). He said that the local harbormaster had no advice to offer in this regard, so you are on your own. 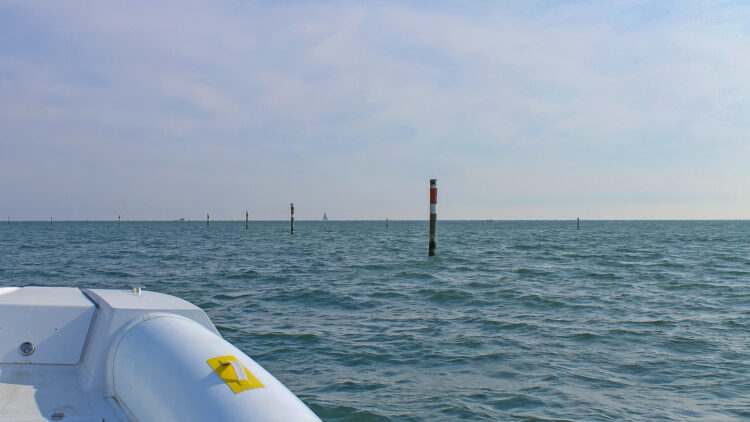