Home > News > By the end of August 8.9 million tourists in Croatia: Germans with 2.1 million most represented – Nautical almost exceeds result of 2019.

By the end of August 8.9 million tourists in Croatia: Germans with 2.1 million most represented – Nautical almost exceeds result of 2019.

Towards the sun – this wish was fulfilled in 2021 with 2.1 million (as of the end of August) Croatian vacationers from Germany alone, thus ensuring an increase of a good 52% by the end of August compared to the previous year, as announced by the Croatian Center for Tourism based in Frankfurt. The positive trend is likely to continue, however, as the populous states of Bavaria and Baden-Württemberg have school vacations until deep into September.

Already now, Croatia has reached 91% of the record year 2019 in terms of holidaymaker numbers from Germany. That 2021 will still reach or even exceed the numbers of the record year despite the Corona restrictions in the early season, there is little doubt. And nautical tourism is also booming: overall, the marinas on the Croatian Adriatic recorded a significant increase. While in 2020 they counted 187,895 guests by the end of August, in 2021 there were already 312,922 water sports enthusiasts who set sail from Croatia, according to the figures of the portal eNautika and the tourist board. 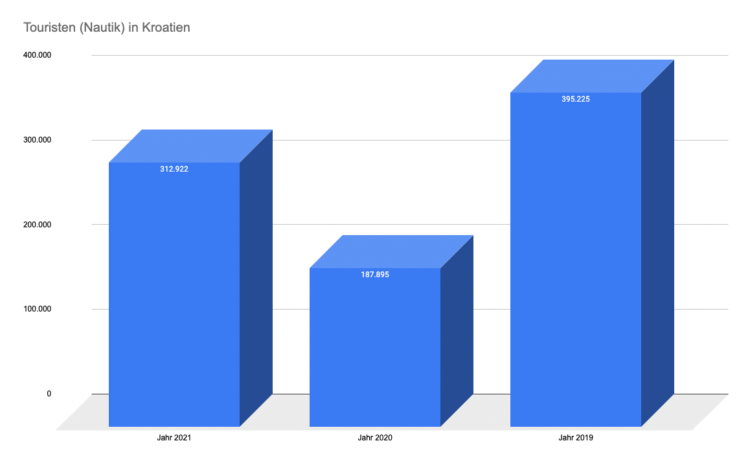 The significant increase in water sports enthusiasts also made itself felt in the bays and marinas, with moorings and mooring buoys already in short supply in July and August. And also the charter companies could not complain so far about lack of incoming: according to a SeaHelp survey, the main season was completely booked with almost all companies, in September there are only isolated charter boats and many companies are happy about a relatively high booking level even in October.

The reasons for this are obvious: from Germany and Austria, Croatia is one of the closest destinations in the Adriatic area that can still be reached by private car, except for border controls on weekends. Thus, one enjoys a certain flexibility with regard to the arrival and departure, an advantage that, at least in times of the Corona pandemic, still subliminally swims with many vacationers. In addition, so far the incidence figures have remained within quite reasonable limits; Croatia was among the Mediterranean countries that were only extremely moderately affected by the pandemic, not least thanks to restrictive measures.

This situation was also reflected in the number of guests until the end of August: about 5.5 million guests could be recorded by Croatia until this time in 2020, this year the number rose to a remarkable 8.9 million tourists, and the end of the line should not be reached by a long shot, because even the off-season has its charms, as is well known.

Charter companies with bookings through October

Mind you, the numbers are just a snapshot, even in September and even into October, not only charter companies, but also hotels and apartment owners are still seeing a brisk influx of vacationers who want to extend their summer on the Adriatic by a few days.

Especially during this time, the country has a lot to offer for gourmets: From fresh truffles in the Mirna Valley/Istria to the grape harvest and the olive harvest with the first freshly pressed olive oil from around October 5, mass tourism changes almost unnoticed to pleasure tourism.

Tags: CroatiaTourism
PrevPreviousVW Up “parked” in the city port Punat: From “woman at the wheel”, the driver was a man!
NextNoises on board: It crackles in the boat – what’s going on there?Next
SeaHelp Service
Current fuel prices
Für tagesaktuelle Kraftstoffpreise
bitte hier klicken!
SeaHelp Service