Autor: Wolfgang Kröger
When it comes to technical problems on board, skippers should have the SeaHelp app installed to be able to call for quick help, because a powerful 600-horsepower RIB has also been stationed at the Baltic Sea, which can be deployed quickly in an emergency. The owner of an elderly, but at least as lovingly restored motor glider had to painfully experience what can happen if you do without it: Shortly before the Heiligenhafen fairway, the engine suddenly failed in a high swell, the ship drifted to shore and sprang a leak.

The crew could no longer fight against the water ingress and had to abandon the ship. The SeaHelp breakdown service specialists, who were called in the day after the incident, had no choice but to salvage the motor sailer, which had been completely destroyed by the salt water, and tow it to Heiligenhafen. 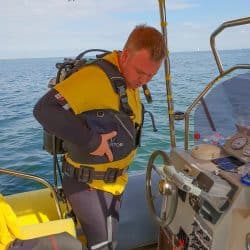 Nenad Kapuc, SeaHelp Baltic Sea boss, actively supported the recovery. “With timely notification there was a good chance to save the ship”, he said. In this context, he once again pointed to the SeaHelp app, which could certainly have provided valuable assistance here.

The cause of the engine failure is currently still unclear. However, experts suspect that the “legacies” of the diesel plague may have blocked the fuel supply, because in calm seas the engine ran perfectly. Only when the swell became stronger and the ship turned in the direction of the Heiligenhafen fairway did the engine suddenly stop. At the same time, the skipper noticed a significant rocking. All signs that residues of bacteria stuck to the tank bottom were loosening and then clogging the fuel filter.

Against this background, SeaHelp once again expressly points out that special attention should be paid to the tanks. Nearly 20% of SeaHelp’s operations each season can be attributed to fuel system problems, particularly diesel plague in diesel engines. According to a SeaHelp spokesperson, such incidents could be avoided if tank hygiene was in place.

Water ingress! From a very normal mission day of the Croatian SeaHelp rescuers.

In our own: SeaHelp map with new infections according to gespanschaften back online