Autor: Gastautor
Inhalt Anzeigen
1. Uninhabited. or Yet?
2. It doesn’t pay to go out of your way
3. From the beach to the restaurant
4. Nature – Show – Play

You don’t have to travel the world to feel like you’re in paradise. The Istrian town of Pula is only a few hours drive from Austria and a few nautical miles from the Croatian dream destination Kvarner. Thanks to the mediation of Master Yachting Germany and at the invitation of Kiriacoulis Mediterranean, we were allowed to look around the area a bit .

Not every port maneuver succeeds happily. Whoever claims otherwise, is either a genius or simply forgetful. Now, the departure at nine knots crosswind (with stern to the jetty) is not fundamentally dangerous, but if then still a squall just after the release of the stern lines therefore rushes, as if it had only waited for this moment, then you are happy if you get out of this awkward situation in one piece. Especially if you haven’t sailed a meter with the new yacht, i.e. if you’re not familiar with it.

This was our first experience with the new Fountaine Pajot Lucia 40 Maestro (= owner version) from Kiriacoulis, when we left the Marina Veruda. But now that we had stored that the two rudder blades are somewhat smaller than desired and have little effect in the harbor, so that the vast majority of steering work must be done via the engines (110 hp), we enjoyed a carefree week at sea. Of course we also enjoyed the leisurely walk in Pula with a visit to the Colosseum and dinner in the old town.

So best mood from the start, which we do not let us take away even in the windy bay of Medulin at the southern tip of Istria. With espresso and cake we watch countless surfers and kiters at anchor and come to the conclusion that Aeolos must be a permanent guest in this corner.

Therefore, it is not too difficult to say goodbye – we sail at half wind course towards our destination. Here the northern inlet Kavran smiles at us, we park ourselves with anchor and shore line in lovely 2.5 knots of wind. The uninhabited bay is visited during the day by a few bathers who make themselves comfortable on the sunbathing rocks formed by wind and weather. But as dusk falls, you have the bay all to yourself. Almost. Because it is only after sunset and dinner on board that we realize enthusiastically that we share the bathing water, which is as warm as a bottle, with plankton, which seems to sparkle in competition with the fantastic canopy of stars above us.

It doesn’t pay to go out of your way

As cool as the encounter with the alien-looking micro-creatures was, the night is equally chilling. After a sumptuous breakfast under the first warming rays of sunshine, we venture to the neighboring island of Cres. Thanks to favorable winds, the sails carry us on a cross course for almost 15 of the 25 miles to our destination Uvala Banja in the north of the island. The completely sheltered bay tempts us to stay, snorkel in the clear water and cook in Italian: linguine con pesto, accompanied by a glass of Barolo from Piedmont. The Croatian gods acknowledge our culinary escapade with an annoying swell that is supposed to last all night, so we escape this curse right at sunrise.

No sooner has Cres rounded to starboard in the north than the wind is asleep and the sun heats us up properly. As tempting as the beach in Uvala Beli looks, we leave Cres on the right, cross over to the island of Krk and don’t stop again until we reach Luka Sveti. The destination Punat would be only five nautical miles away, but in this heat we want to enjoy a long swim before we moor in the marina. And the bay is perfect for this: turquoise water, old quay fragments, rusty bollards, nature colored by birdsong, broken only by a whoop of youth from the saloon. The water in the bottles, which were immediately put into the freezer on the skipper’s advice, has indeed frozen to ice. The sun has obviously not left the solar panels cold either.

From the beach to the restaurant

In the Marina Punat we are kindly assigned a place alongside at the head of the jetty and the crew is shipped to the beach Medane by slow train as requested. In the evening we let ourselves be spoiled in the marina restaurant: Steaks are grilled open air, and with view from the terrace on the bay we enjoy also the live music, which accompanies us into the night.

Is there anything more beautiful? Yes, if you are a nature lover. Then the very next day you set course for the southern tip of the island and pull the handbrake in front of the rock face of Plaža Zlatna Obala with its fine pebble beach. The bay is by far not the only one, thanks to its rocky ridge shining in rich gold, which is reflected in the crystal clear water, but it is probably the most splendid berth in this corner of Kvarner.

The jump to Sveti Grgur is more difficult, as the island was a prison island for women under Tito. Another natural jewel is the densely forested Uvala Kristofor on the island of Rab, where only three other catamarans stay overnight.

Another highlight is provided by nature the next day in Balvanida on the island of Lošinj: young people climb the ledge above the grotto in the rock face via a trail and plunge into the deep water in front of an audience (on the surrounding yachts). The spectacle is played until sunset, which is why the host of the bay has to be patient a little longer until all the guests have arrived. He does not have to worry about empty tables, because for many this is the last opportunity before returning to the base marina.

So also for us. The last day starts like the first: with surprisingly more wind than predicted, so we can cover the 33 miles back to Veruda Marina mostly under sail.

This with mixed feelings, since the wonderful time in the Kvarner Bay probably only passes as a trial week. But how did Renata Marević say goodbye to us in the Marina Punat? “Goodbye next year!” 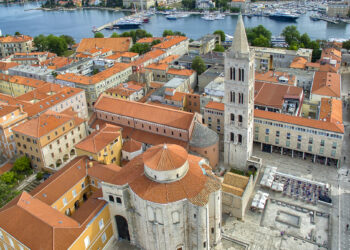 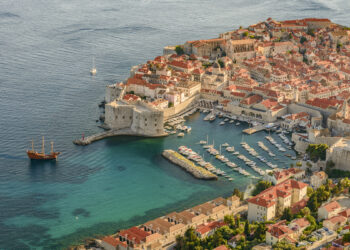 Trip tip: One week South Dalmatia with your own yacht 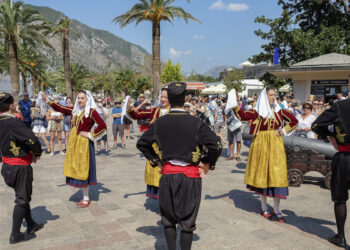 Trip tip: Montenegro with your own yacht