If, like us, you have chartered a boat at Marina Baotic in Seget west of Trogir, or choose the ACI marina opposite the fort as your port of departure, you should definitely take time to visit the UNESCO World Heritage town of Trogir. The Romans once separated the old city center from the mainland by a canal. Today, those who cross the bridge to the old town are immersed in an exciting history of the city that is over 2,000 years old. Narrow, picturesque alleys lead to historic buildings and squares, framed by a gorgeous waterfront promenade – skipper tip of the SeaHelp editorial staff for a successful cruise.

A cab takes us from Split’s now modernized and expanded airport in a few minutes to the old town of Trogir, 15 kilometers to the east, where the driver tells us that we’d better walk to the center from the north gate, because the small streets are simply too narrow for his cab. I check into the small, charming Old Town Hotel Monika, where our crew will spend the first night before heading to the boat the next day. Ahead of us is a week of sailing in Croatia on a new, spacious 45 foot Lagoon sailing cat – gorgeous views!

In the evening before the start of the cruise we are looking for a quiet restaurant without “tourist rip-off” and we find it with the Calebotta in Gradska Ulica 23 in the middle of the old town. We enjoy the excellent service, the good traditional food and the delicious regional wines in the romantic garden of the popular restaurant (advance reservation recommended), surrounded by historic buildings – for us a perfect mood for the upcoming sailing week.

Trogir is a UNESCO World Heritage Site – guided tour through 2,000 years of history

Day two starts early in the morning for us – with a guided tour of the pretty, winding and at this time still deserted UNESCO World Heritage town of Trogir, which was already known as the Greek settlement of Tragurion in the third century BC. A bishop’s seat since the 11th century (until 1828), the city was conquered – and destroyed – by Saracens in 1123. Already in the 12th and 13th centuries, however, Trogir again experienced a strong economic boom – which lasted until 1420, when the long period of Venetian rule began.

After the fall of Venice in 1797, Trogir was almost continuously Austrian until 1918, when it fell to the Kingdom of Serbs, Croats and Slovenes. Later it became part of the Socialist Federal Republic of Yugoslavia, and since 1991 Trogir has been part of the independent state of Croatia. The old town of Trogir is considered an “outstanding example of urban continuity,” says our guide; the Romanesque town represents the “best preserved Romanesque-Gothic complex not only on the Adriatic, but in all of Eastern Europe.”

Romanesque, Gothic, Renaissance and Baroque – united on a small island

In the medieval historic center, partially surrounded by a city wall, there is a preserved castle, a tower, ten churches and a number of well-preserved houses and palaces from the Romanesque, Gothic, Renaissance and Baroque periods.

We visit the main western portal, considered a masterpiece of the 13th-century sculptor Radovan and the most important work in the Romanesque-Gothic style in Croatia, the 13th-century St. Lawrence Cathedral, the northern city gate and wall, the 15th-century Kamerlengo fortress, an old 700-year-old princely palace, the Cipiko Palace (500 years old), and a handsome, equally old clock tower complete with 15th-century city loggia.

Then we pack our board bags and take a cab boat on the short water way to the western Marina Baotic, where our Lagoon 450F, freshly cleaned and refueled, is already waiting for us. 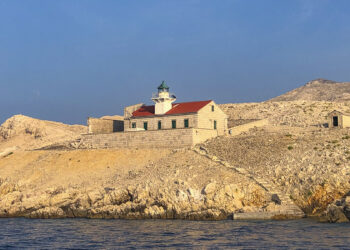 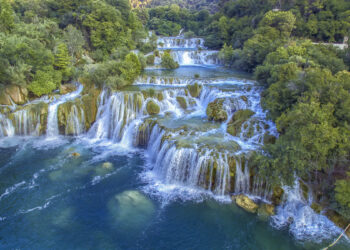