Watermakers on board: Water march!

Fresh water is a precious commodity on board. By installing a watermaker, yacht owners generate their own water. This saves the hassle of lugging water bottles and makes them less dependent on the supply stations in the harbors. SeaHelp explains for whom the installation of a watermaker is worthwhile.

After a refreshing swim in the sea, reaching for the shower next to the bathing platform is a matter of course for many. A quick rinse off the salt water – even if you’re jumping back into the cool water in a few hours. Another quick trip to the toilet – and, poof, several liters of fresh water flow out of the tank during the flushing process. And when washing the dishes – whether simply by hand or with the ship’s own dishwasher – precious fresh water is used again.

It’s wonderful to be able to use water on board almost as carefree as at home. Trusting that the installed watermaker will already provide replenishment….

Fact is: In recent years, water consumption on board has increased massively. The times in which an extended summer trip was rather “camping at sea” and the sanitary houses in the ports were used for an extensive shower, are over. Fewer and fewer harbors offer well-maintained shower cabins and toilets, and even fewer dishwashing stations.

On the other hand, the tank capacities for fresh water on the yachts have become larger and larger. And so are the demands of water sports enthusiasts for a comfortable shower experience, just like at home. This also includes the fact that new yachts have more than one “wet cell”, so that both owner and guests have their own bathroom at their disposal.

But where does all the water come from? Before the start of the cruise, there is bunkering in the harbor. Food, lots of drinking water in plastic bottles, diesel and fresh water. The larger the ship or hull, the more water can be held in the tanks. This must then be used for the duration of the trip. And if the water runs out, another stopover in a port is necessary. The quality of the water coming out of the hoses in the marinas varies greatly. Often chlorine is added to the water, giving it an unpleasant taste. Sometimes it smells a little brackish.

Very few water sportsmen use the water from the tanks as drinking water. So it is still necessary to carry many water bottles on board. These plastic bottles are not only heavy and take up a lot of storage space, but also pollute the environment.

Installing your own watermaker, which turns salty seawater into deliciously fresh fresh water, seems to be the solution for the perfect water supply on board. If you produce your own water, you make yourself independent and can go on tour completely self-sufficient – as long as there is enough energy on board at sea to produce the precious wet.

The function of a watermaker is easy to explain: using the principle of reverse osmosis, seawater is forced through an extremely fine membrane at high pressure. In the process, the water molecules are separated from the salt compounds. A useful side effect is that not only salts but also microorganisms and tiny particles of dirt and plastic are filtered out in this way. However, generating a large amount of fresh water in a short time requires a great deal of power or energy.

If you are traveling with a very small crew and only want to take a watermaker on board for emergencies, you can rely on a small, manually operated device (e.g., from Katadyn) that produces between one and four liters of water per hour, depending on the model. That’s enough as tea water and for brushing teeth, but not enough to give an entire crew an extensive showering experience or even to turn on the on-board washing machine. However, the warmer the cruising area, the more strenuous it is to make your own water by hand. Many a sailor on a long voyage has said that he sometimes produces more sweat than water.

Energy via the generator

Electric watermakers, which produce many times the amount of water, work with 220 or even 12 volts and are usually fed by an on-board generator. Depending on the power, this generates between 100 and 300 liters of fresh water per hour. As an alternative to the generator – which consumes diesel fuel – modern watermakers can also be powered by energy generated from solar panels or wind generators. In this case, however, only between 20 and 40 liters of fresh water are produced per hour.

The best place to produce your own water is at sea, where the water has few suspended particles and algae. Near the coast, in front of busy beaches and anchorages, the sea water is often not as clear and clean as one would like. Using water from the harbor for treatment is a no-no, oil particles gum up the pores of the sensitive membranes and dirt particles and harmful substances make the extracted water an unappetizing affair.

30 liters of fresh water per day per person

But how much water do you need per day on board? As a rule of thumb, each person uses at least 30 liters of fresh water per day. Accordingly, a crew of four needs about 120 liters per day, measured against an average tank capacity of 500 liters, the water supply on board is sufficient for a maximum of five days. If a watermaker is on board, the precious water is used much more wastefully, so that around 50 liters of water per person per day must be taken into account. By way of comparison: “On land”, waterworks and utilities calculate water consumption at an average of 130 liters per day and person.

Installing a fixed watermaker in a yacht is not always easy, however, depending on how much space is available below deck. However, it is possible to position the various components in different places on board, so that small gaps that still exist can be cleverly exploited. The more complicated the installation, the more difficult it is to perform regular maintenance and replace the filters. And if the vessel has not been used for a while, hoses and connections must first be thoroughly flushed before the next use. 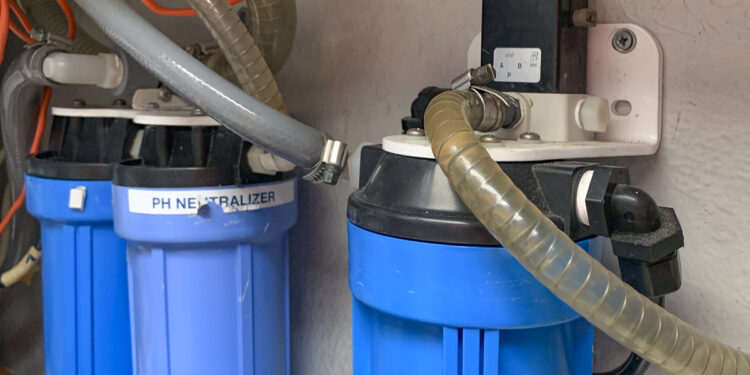 A good alternative, on the other hand, is the portable Rainman Watermaker (distributed by vesselspa.com), which can be easily carried aboard similar to a gas can. Developed by smart Australians, this model eliminates the need for expensive installation, and after just ten minutes on board, the first drops of precious fresh water are produced. The water has the same temperature as seawater – so depending on which regions you’re traveling in, it can be used directly for a short cool-down with the shower.

At the same time, the Rainman Watermaker can be conveniently used on various yachts, the weight of the main unit is 25 kg, the accompanying case with membrane weighs 15 kg. Maintenance and repair work on board is completely eliminated, as the unit can simply be taken to the service workshop after use. The portable watermaker, which produces between 25 and 140 liters per hour depending on the power level, is operated via the on-board system with 230 or 12 V, but there are also gasoline-powered models.

Compared to permanently installed models, the Rainman Watermaker has the further advantage that it only needs to be carried on board when required, allowing water sports enthusiasts to react flexibly to different crew sizes and constellations. If only two people are on board, the water from the tank will last much longer than if two other guests are present.

Conclusion: Whoever decides to install or take along a watermaker does not necessarily save money and energy due to the – now moderate – acquisition costs, but treats himself and his crew to a great deal of independence and comfort. Fresh water anytime and anywhere!