8.10.2022
in Guide
|
Update: 8.10.2022
|
Autor: Matthias Müncheberg
Inhalt Anzeigen
1. A SeaHelp member informed the editorial staff about a case of boat crime
2. The alleged buyer was eager to buy the boat without having seen it before – that’s when the seller became suspicious
3. A company hired by the buyer’s agent was to “inspect” the ten-meter boat – for 3,000 euros
4. The seller withdrew from the deal – rightly, because this was not about the boat
5. Through unserious business conduct, money should be pulled out of the pockets of potential yacht sellers
6. Boating crime concerns everyone: Write us about your experiences with boat crime, we also publish your “case”

Who would like to buy a yacht, is well advised to secure itself, otherwise a bad surprise could threaten. But also who wants to sell his used yacht, should look carefully, with whom he gets involved: a SeaHelp member informed the editorial staff about a criminal scam of alleged boat buyers – who are actually but not at all about the boat.

That boat theft or the embezzlement of boats also do not stop at national borders, we have already described at this point in a News article of 12.07.2022. Also the fact that in practice in the Schengen area at the borders only random checks of persons and vehicles take place, open the door to the thieves in the truest sense of the word (see also our article on the topic boat crime about the Constance Competence Center for Boat Crime KBK).

In addition to boat theft and embezzlement, which unfortunately do not occur so rarely, there are other “scams” and tricks with which criminals want to get money in an unfair way. Who would ever think that when you advertise your yacht for sale, alleged prospective buyers are after something completely different than the yacht for sale?

In a current case, about which a SeaHelp member informed us recently, a yacht should be sold, which had been at the time of the insertion in the port of Rab on the Croatian Kvarner island of the same name. One of the alleged prospective buyers had attracted the attention of the seller, because the contact ran via Whatsapp, and the “buyer” changed his profile photo several times during the conversation, which had extended over several days.

The seller rightly became suspicious, suspected something bad, but wanted to “get to the bottom of” the alleged buyer. The prospective buyer, who introduced himself as Mr. Lucas Smith from Sweden, allegedly found the boat “interesting”, and inquired whether it was “still available”, he wanted to buy it “absolutely”. The seller found his initial suspicions confirmed, as no details about the boat were known at that time.

The seller (apparently) got involved in the “deal”, and wrote to the alleged prospective buyer that he could not buy the boat without a customary, in-depth inspection. However, this seemed to accommodate the “buyer”, because now he came around the corner with his actual “request”: the buyer wrote that he had spoken to his lawyer, and that a “survey” should take place at short notice “by a company”.

They switched to mail correspondence, and a short time later the seller found a mail from the “buyer’s lawyer” in his mailbox. Mr. “Barr. Christopher Andrey” was pleased with the contact, wrote that he was instructed by Mr. Lucas Smith, it was about the purchase of the motor yacht Regal 320 (which he described as a “perfect boat,” and further wrote that an “inspection” was required for this “transaction” of purchase; he himself was “Barr. Christopher Andrey, a legal practitioner (SAN, LP),” and therefore the correct person to contact.

A company hired by the buyer’s agent was to “inspect” the ten-meter boat – for 3,000 euros

And this is exactly where the “scam” comes into play: commissioned should be a company called “Infloat Shipping Company”, which wanted to send three “agents” to “inspect” the yacht for sale. The fee for this was 3,000 euros, the seller had to pick up the agents from the airport, bring them to the boat, entertain them and possibly also provide overnight accommodation.

A “consultation for the optimization of the purchase” was “included”. In all other respects Mr. Lucas Smith, the alleged prospective buyer, had already agreed to the purchase price of 48,000 euro – without the boat however before in inspection to have taken or details to the boat to know.

The fees of 3,000 euros were then to be divided: the seller had to pay half, i.e. 1,500 euros, the other half would be paid by the buyer, the “lawyer” said. One wanted to have immediately the bank information of the salesman, in order to convey these to the company “Infloat Shipping Company”.

The seller withdrew from the deal – rightly, because this was not about the boat

The seller then withdrew from this conversation – he had learned enough. It is easy to imagine how this matter would have turned out: the seller would have paid at least the required 1,500 euros, picked up and entertained the “agents” (if they had existed at all), and would have been left sitting on these costs. Because: the alleged “agents” would have found with certainty a trick to estimate the boat far below value or to “optimize” the purchase by their “advice” unilaterally (namely in favor of the buyer).

If the seller had not agreed to this taxation of the “agents”, and the purchase would not have come about, he would most likely still have been fully stuck with the costs of his share of the “inspection”, because this would have been regulated in an extra contract – independently of the actual purchase/sale of the boat.

Through unserious business conduct, money should be pulled out of the pockets of potential yacht sellers

The SeaHelp member who wanted to sell his yacht, and had shared his information with us, found his way out of this dirty “deal” in time, which had not been about buying the yacht in the first place, but only about pulling money out of the pockets of yacht sellers through dubious business conduct.

The seller had initially and only for appearances got involved with the alleged “buyer” and his “lawyer” (who probably consisted of one and the same person) to find out the “trick” with which they wanted to fleece him, the seller. The concern of the SeaHelp member: “I found it funny, but unfortunately there are enough people who may play along”. For this reason, he suggested to make this case once public.

Boating crime concerns everyone: Write us about your experiences with boat crime, we also publish your “case”

We at the SeaHelp editorial team are happy to comply with this request. We would like to combine the publication of this reader’s letter, for which we would like to thank you at this point, with an appeal to all readers to also tell us about their experiences they have had with criminals when buying or selling a yacht.

Boat crime concerns everyone and can affect anyone. It must and can be stopped in time. For this purpose it is helpful to know the fraudulent “tricks” and “scams” of the criminals, so that nobody falls for it in good faith. We would be happy to make your “case” public at this point. 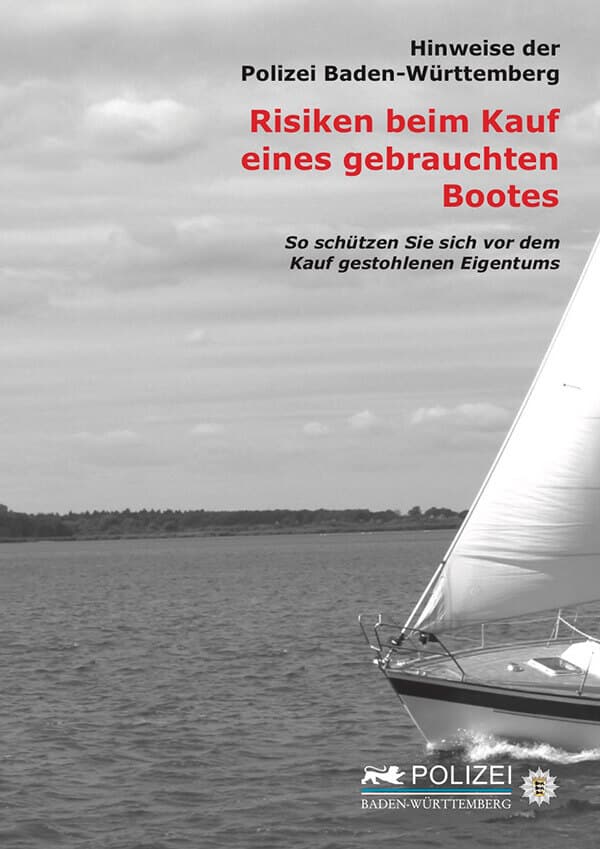 Winter break for the sails: Dry, clean and as free of kinks as possible