Croatia: Tourist tax for skipper for the year 2019 adopted

Autor: Wolfgang Kröger
At the beginning of August, the Croatian state initiated the new regulation of the tourist tax for skippers. For boats with a length of five to nine meters, which want to stay in Croatian waters for up to 90 days, it will again be up to 50% more expensive compared to the previous year. For boats with annual moorings, however, it will be 10% cheaper from 2019 than in the previous year. For short breaks a new regulation has been introduced: the tourist tax can also be paid for a period of at least three days.

With the publication of the new regulation of the tourist tax was also announced that measures are to be taken, which make it possible to pay the tourist tax soon not only in the port office, but also in the marinas and at the landing. This means that the possible waiting times before the port authorities should be a thing of the past in the future.

Charter guests must also be prepared for a slight increase in the tourist tax: For them, as in the past, the general tourist tax (such as for hotels) according to tourist class A, high season is charged. This rose from eight kuna (2017) to 10 kuna.

Looking at the development as a whole, it can be said: Owners of boats up to nine meters in length pay significantly more in the future, unless they pay the annual fee. From nine meters to over 20 meters applies: the larger the ship the greater the reduction compared to the previous year. For example an annual fee for a yacht longer than 20 meters instead of 14,500 kuna will cost only 6,000 kuna next year. 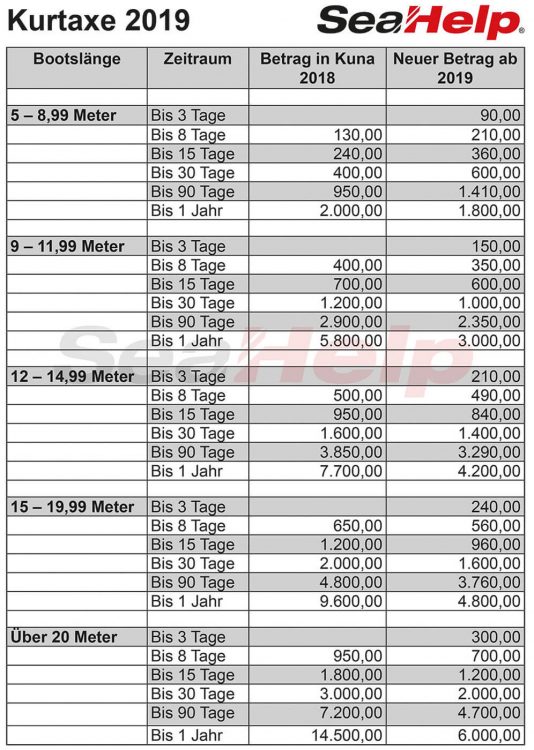