“Goli otok“. This translates as: The naked island. And that’s true, because the island, which is only 4.7 km² in size and has a gloomy past, is largely bare and barren. For decades, the island, located in the Kvarner Bay between the island of Rab and the mainland, was used as a prison island for male prisoners. Female detainees were housed on the neighboring island of Sveti Grgur.

Already during World War I, Austria-Hungary used the island to imprison Russian prisoners of war, after which the island was abandoned and used for sheep breeding.

After the Second World War, when the Yugoslav state surrounded six of the republics, now independent again, and was ruled with an iron hand by Josip Broz Tito, another penal camp was created here. If at first it was Stalinists and fascists who were banished to the prison island, in the following years more and more convicts of the most different political directions came to the island. “Goli otok” became a dreaded re-education camp, known behind closed doors as “Tito’s concentration camp” or even sarcastically as “Tito’s Hawaii”.

Due to its island location, the penal camp was ideally suited as a high-security prison for political prisoners – no one could see what was happening here. Escape from the prison island, which is now listed in travel guides as Croatia’s Alcatraz, was impossible due to complete surveillance, but also due to the strong sea currents and the great distance to the mainland.

Used as a prison island for almost 40 years

Until 1988, shortly before the collapse of the USSR and the dissolution of the Yugoslav state, the high security prison on “Goli otok” was in operation. The horrible conditions on the island became known only gradually. Today the island is uninhabited, the evidence of forty years of use as a prison island under sometimes inhumane conditions stands as abandoned, slowly weathering relics on the island.

Excursion boats now head for the island daily, and those who feel hungry after an extensive tour past workshops, barracks and depots can stop off at the popular restaurant “Porat”.

Anchoring in the bay Tetina

Central anchorage for yachts and landing place for the commercial passenger ships is the bay Tetina with the port Melna in the west of the island. From here you can already see the former administration building, the sawmill, the blacksmith shop and the long closed cinema of the prison island. However, only the guards and employees on the island were able to enjoy a movie, mainly propaganda films were shown.

16 different facilities on the island can be explored one after the other, those who like can explore “Goli otok” on their own, but there are also guided tours of the island. Those who prefer to experience the island in fast forward, book a ticket for the small tourist train “Goli Express“, which takes you once across the island in 20 minutes.

In the immediate vicinity of the small harbor is the former industrial zone of the prison island with a stonemason’s workshop, blacksmith’s shop and modest wood industry. Some of the very high-quality, well-made products were exported worldwide.

Other anchoring possibilities are in the large bay “Vela Draga”, also called the “baker’s bay” and the small bay “Mala Draga”. From here you can see the slaughterhouse, stables and the former pumping station.

Working in the quarry

Whoever was imprisoned on the island of “Goli otok” was, in the eyes of the Yugoslav state, an enemy of the state, monarchist, fascist, bourgeois or even social democrat. Not infrequently, the confessions of those imprisoned were extorted under torture. Those who were convicted and sent to the island of “Goli otok” had to perform mainly hard physical labor under harsh conditions and received sometimes draconian physical punishments. It is estimated that between 11,000 and 18,000 men were imprisoned on the island. How many of them died as a result of torture and abuse is not known.

On the barren island, the prisoners were mainly used to work in the quarry; since the 1960s, terrazzo tiles and furniture were also produced here, which decorate numerous houses on neighboring islands.

The blocks of stone cut on the island were used to build, by hand, the administrative and residential building of the prison warden and commanders, which is still in good visual condition today. The prisoners derisively referred to the building as a hotel due to its good structural condition – it was in stark contrast to the spartan accommodations of the prisoners.

The supposed idyll of the island of “Goli otok”, from which you have a fantastic view of the neighboring island of Rab and the Adriatic Sea, is deceptive when you think of the cruel crimes against humanity that took place here.

Even the roughly six-hour crossing to the island, during which the prisoners were bound hand and foot, was an ordeal. The new arrivals were greeted with beatings by the prisoners before being assigned physically hard labor.

The island is still largely bare today, the few trees near the harbor having been planted by the prisoners. Summer heat and freezing winds in winter made working conditions difficult. To ensure a fresh water supply on the island, the prisoners built large water collection basins from which the water was transported to the buildings in open, shallow stone channels.

At your own risk

More than 30 years ago, the last prisoners left the island of “Goli otok”, and since then the buildings have been empty and decaying. Everything that was still valuable or usable was stolen, the floors are partly covered with wood and metal remains. Sturdy, safe footwear is a must when visiting the island, the floors are uneven and stony. Some buildings are in danger of collapsing, there are no warning signs – so do not enter every dilapidated building full of curiosity. 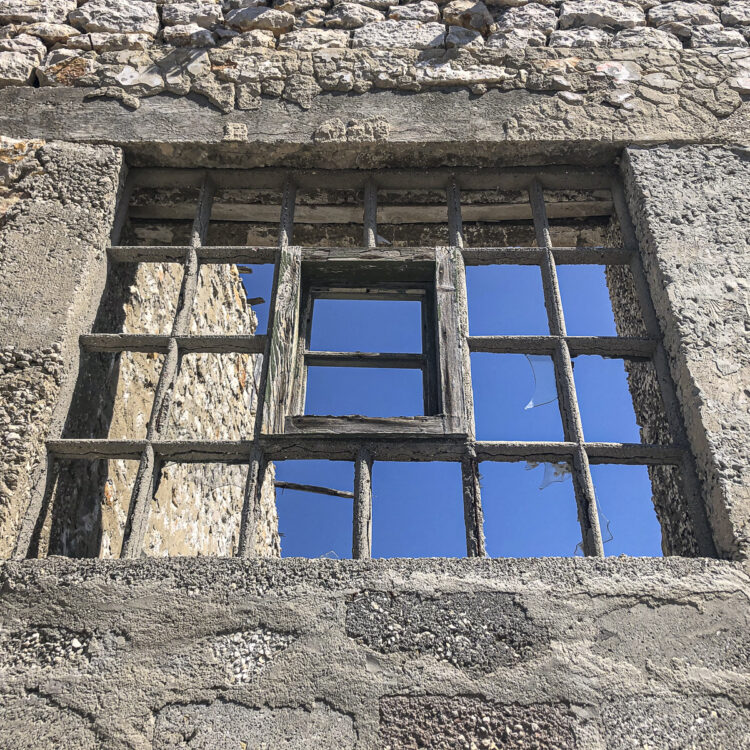 Unfortunately, there was a failure to preserve selected facilities on the island of “Goli otok” or to convert one of the large buildings into a museum with an attached memorial. A memorial plaque and a memorial cross commemorate the suffering of countless people on the prison island. An 11-minute documentary film with various subtitles about the island’s cruel past is shown in the adjacent cinema. Numerous writers have written about their experiences on Prison Island, where everyday life was dominated by arbitrariness, terror, violence and denunciations.

Those who have extensively explored the various stations with their morbid facilities, cannot help but afterwards deal intensively with the history of Yugoslavia and the communist, real-socialist dictatorship. But that’s how it is on a trip through the island world of Croatia at each new destination: history and millennia-old culture pelt the visitor everywhere. Together with the Mediterranean charm of the towns and villages and the seductively glittering Adriatic Sea, culture and history make up the special charm of the destination.