Picturesque bays, tranquil villages, dreamlike clear water and a deep green hinterland: Menorca, only a hop away from the big sister Mallorca, is a dreamlike sailing area. Sailing blogger and ocean7 author Markus Silbergasser reveals to us his favorite places on a circumnavigation of the island.

Just as Mallorca protects Menorca, which is located in the northeast, a little from the Poniente, the westerly wind coming from the Atlantic, the big, famous sister island also protects its neighbor from too many visitors. Lying in the shadow of Mallorca, Menorca was able to preserve a wonderful originality. Almost half of the island is protected, the landscape is very green and wooded, many beaches are undeveloped, large hotel complexes are not present and even in high season there are comparatively few yachts in the bays – a dream for yachties, swimmers and nature lovers.

The island can be circumnavigated in only 80 nautical miles. Which direction you choose depends primarily on the current wind and weather forecasts. There are enough beautiful places around the island, so the lack of time to explore will probably be the biggest problem. 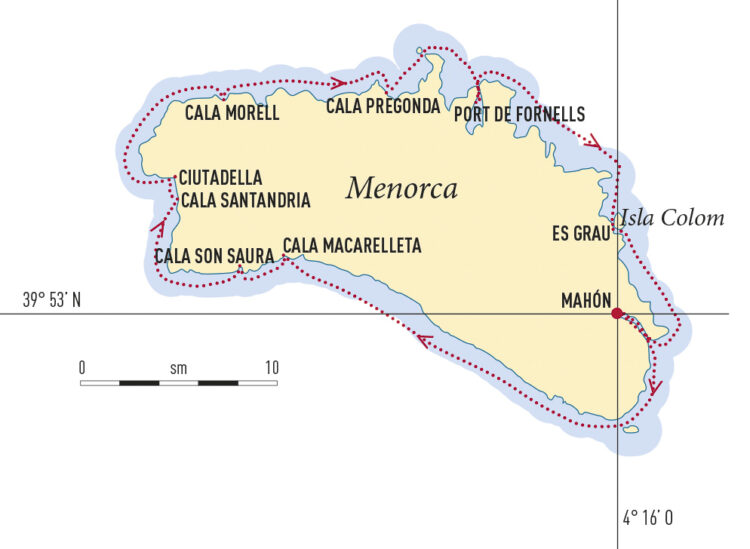 The starting point for most cruises is the capital Mahón (or Maó), which has an airport and a charter base. The city has one of the best protected natural harbors in the Mediterranean. In the past, anchoring was still allowed in the large bay, but today you have to go to one of the many smaller marina operators to reasonably visit the old town. Anchoring is only allowed in Cala Taulera – but from there it is about five kilometers to the city center, a bit long for a dinghy ride.

From bay to bay to the west

According to many guidebooks, the double bay Cala Macarella / Cala Macarelleta is one of the most popular bays in Menorca. We could enjoy it this year at the end of June nevertheless for a few hours alone. But for that we had to leave the resort of Cala Galdana at dawn and sail the few miles further west.

From 10 o’clock on, the cove filled up abruptly from land and sea and we decided to leave the bay crowded for the others from 11 o’clock on. In the large anchorage Cala de Son Saura with well holding sandy ground we found then again enough place to spend the afternoon comfortably.

We spent the night in the bathing bay Cala Santandria, which is only two nautical miles south of the city of Ciutadella.

Many boats do not have space in the old harbor of Ciutadella – but we have also experienced very quiet nights at anchor here. For me the most beautiful and authentic town of the Balearic Islands.

Besides the small marina, there is also a good possibility to anchor directly in front of it. So you have a little more board money for dinner or a chill drink in the quaint bar area right in the inner part of the narrow bay, where the fishermen used to live.

From Ciutadella to the east

Further the island circumnavigation goes along the rough north coast. Here you can still find many quiet anchorages. A place, which we have won only on the second view dear, is the Cala Morell. One anchors here relatively well protected in the interior of the bay. The settlement in the bay reminds of Greece or for Balearic connoisseurs of the architectural style of Ibiza.

The most beautiful bay of Menorca for me is the truly picturesque Cala Pregonda, lined with magnificent rocks, where you are virtually framed by rocks. After the two beautiful sandy beaches are only accessible by foot from the land side, this place is always only moderately filled.

Who has time and desire, can undertake extensive walks near the coast, always with magnificent views of the sea. Around Menorca there are countless other beautiful anchorages – if you have time, you can dangle from bay to bay for weeks. Recommendable is e.g. the small fishing village Es Grau with its well preserved dune belt. Or – gourmets beware – Port de Fornells, where the lobsters are said to be so good that even Spain’s royal family likes to stop by for a meal. 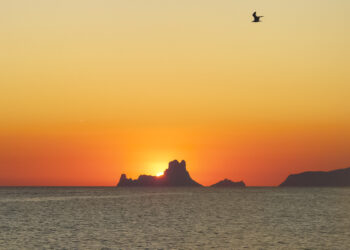 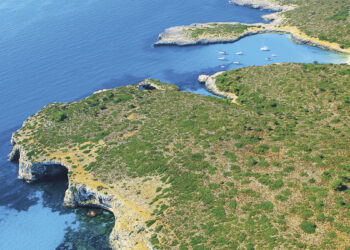