19.10.2022
in Cruise
|
Update: 19.10.2022
|
Autor: Matthias Müncheberg
Inhalt Anzeigen
1. First of all, the further south you go, the warmer the weather – and the sea
2. Some charter companies keep yachts of various sizes ready even in autumn
3. Skippers should find out beforehand about opening and closing times of the konobas – and make reservations in advance if necessary
4. If the weather is nice, an anchor stop in one of the now empty bathing bays is recommended

Who sets out in the fall to “experience” Croatia by boat, which may mostly hope for free berths in ports, marinas and at the buoys, the most beautiful anchor bays are now in October and November no longer as crowded as in the summer (main) season, and also at the hot spots of the tourist destinations and in the traditional konobas finally more peace returns. Törn tip of the SeaHelp editors for the colder season.

Who does not know – Croatia is, especially for water sports fans, a dream destination. But many boaters are deterred in the summer (high) season by crowded ports and marinas, high prices and too many tourists in the port cities of a cruise along the coast of the Adriatic littoral state.

For these skippers it offers itself quite to shift the Croatia trip once into the after-season. Who visits the altogether nearly 1,800 kilometers long Adriatic coastline of the mainland and the innumerable offshore islands in the autumn, many advantages beckon – but also some disadvantages are to be considered before the start of the cruise.

First of all, the further south you go, the warmer the weather – and the sea

If Croatian summers by the sea are mostly sunny and dry, with average maximum temperatures around 30 degrees, winters are considered rainier, but quite mild. In the northern part of the coast, night frosts occur more often in winter, while in the southern part this is the case only on a few days.

In Trogir, daytime temperatures in October usually still reach 20 degrees, it is mostly sunny and clear, the probability of rain is less than ten percent, and even for November applies: to more than 40 percent is mostly sunny, the temperatures often still climb up to 16 degrees, and the probability of rain is less than 15 percent. Even in December, the sun often shines, it rarely rains, but is still only about 12 degrees during the day.

Going even further south, for example to Dubrovnik, you can also expect sunny weather in October, the daily maximum temperatures are also around 20 degrees, and the probability of rain is only 12 percent. In November, it cools down here only slightly to a maximum of 17 degrees, and the probability of rain rises moderately to 14 percent. In December, it still gets as warm as 12 degrees, 48 percent of the weather is sunny and clear, and only 13 percent is the chance of rain.

Some charter companies are well prepared to rent yachts even in the fall, these should then be equipped with a well-functioning heater – there comes coziness. The water is no longer so warm in the fall (October), but even then a refreshing bath is still recommended – if afterwards the on-board heating pleasantly bubbles and a warm bunk beckons.

A special weather phenomenon is the occasional Bora, a cold downdraft wind that can reach considerable strength on the Croatian coast. In the colder half of the year, the bora can blow for several days. In winter, the storm not only lasts longer, but it also occurs more frequently. This means: Skippers who want to be on the water in Croatia during this time should deal with this weather phenomenon in detail beforehand and adjust the cruise plan accordingly (weather reports / ports of refuge, “Plan B” etc.).

In general, however, it is much easier to find free moorings in autumn on the Croatian coast, whether in marinas, city harbors or at the buoy; even otherwise very coveted places directly on the waterfront of historic port cities and towns are now free and invite you to make a cruise stop.

Although not all konobas, cafes and stores are now open as they are in the summer season, it can be helpful to find out about opening and closing times on the Internet beforehand and, if necessary, to reserve seats in good time in one of the still open restaurants so as not to experience any nasty surprises on the spot. Well advised is who can fall back as a “Plan B” on a well-stocked food baking box, in order to be able to prepare in the case of the cases simply even an on-board meal for the crew.

“In the off-season, i.e. in the months of October and November, you can finally enjoy the otherwise crowded big hotspots in peace and quiet,” recommends Wolfgang Dauser. The SeaHelp managing director, who himself spends several weeks each year by boat in Croatia, advises, in addition to Dubrovnik, Trogir, Rovinj, Pula, Rijeka and Rab also cities such as Losinj, Zadar, Tribunj, Sibenik, Primosten, Split, Makarska, Hvar or Korcula to call; also a trip to the waterfalls in Krk worthwhile.

If the weather is nice, an anchor stop in one of the now empty bathing bays is recommended

If the weather is nice and sunny, an anchor stop in one of the bays, which are usually empty at this time, is recommended. Who wants to spend longer time at anchor, however, should consider that most yachts need an E-shore connection if permanently heated on board.

Many direct flights to Croatia, for example from Germany, are available until November, to Dubrovnik even until December, says Max Barbera of Barbera Yachting. No reason therefore, not to make itself also times in the colder season on to Croatia, in order to start there with friends or the family to an “autumn Tr?n for Geniesser”. 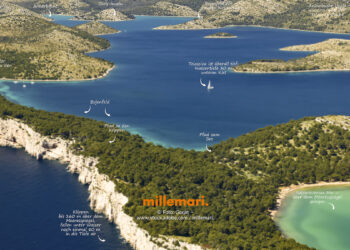