Croatia, on board, Wining and dining

Cooking on board: Five dishes that are good to prepare on board.

With the right ingredients and especially fresh vegetables, fish or even meat, wonderful dishes can be conjured up even in the narrow galley. Casseroles and dishes that can be prepared in just two pots are particularly practical. If it does get too crowded on the two-burner stove, side dishes such as rice, pasta or boiled potatoes can be kept warm in the pot with a lid, wrapped in a sleeping bag or blanket, for around 30 minutes.

However, passionate hobby cooks sometimes have to improvise in the pantry if the extensive equipment of practical kitchen aids they are used to at home is not at hand. Many therefore travel with their own set of knives wrapped in a leather roll, just as top chefs from all over the world do. Equipped in this way, pieces of meat can also be parred on board and large quantities of vegetables can be quickly cut into bite-sized pieces.

SeaHelp Extratipp: Who takes his own knives on board, should also pack a good to use peeler with, which are scarce on most charter yachts!

Fresh fish of the day, caught just offshore – it doesn’t get any better than this to turn the raw meat into a special appetizer right on board. Ceviche is the name of the delicious starter from South America, for which “white” fish varieties such as cod, pike-perch or even sea bass are particularly well suited.
In addition to the fish fillet – around 100 grams should be included per person for a starter – tomatoes, red onion, celery, coriander and a chili pepper should also be on the shopping list, and above all limes or lime juice. You need at least one lime per hundred grams of fish. Good olive oil, salt and pepper should be available in the pantry.

And this is how it’s done: Wash the fish fillet and dab it dry, remove any last bones and cut it into small cubes or strips with a sharp knife (it’s worth taking your own knives on board!). Then pour the lime juice over the fish pieces and mix in, then leave the fish marinated in this way covered in the refrigerator for at least three hours, stirring gently occasionally.

Remove the fish from the refrigerator and add the vegetables, cilantro and chile, drizzle with a little olive oil and season with salt and pepper. Let sit at room temperature for about 20 minutes before serving.

SeaHelp Extra Tip: While the original recipe combines mainly tomatoes and limes with the fish, we recommend trying the recipe once with watermelon or mango pieces. The fruity sweetness creates an interesting flavor contrast to the rather salty fish.

The Swiss classic for all cheese fans comes on board in a casserole dish from the oven. The base is potatoes, which are previously boiled and halved. On top, depending on your taste, you can add finely chopped cooked ham or bacon cubes, with plenty of cheese on top. It does not necessarily have to be raclette, but it is important that the cheese has a high fat and protein content so that it melts quickly and produces creamy strings. Young cheeses such as butter cheese, Emmental, Gouda or even mozzarella are particularly suitable for gratinating.

If you prefer to enjoy meatless, you can also add sliced zucchini and tomatoes to the casserole instead of ham or bacon. In the preheated oven, the cheese casserole sizzles away for about 20 minutes at 180 degrees, spreading a delicious aroma.

The classic beef tenderloin comes in many different variations. To keep the effort on board and the amount of ingredients and spices manageable, we recommend the basic version: the finest beef fillet with mushrooms, onions and gherkins or even small cornichons in a cream or even creme fraiche sauce with wide noodles, such as linguine.

First cut the fillet tips into fine strips, then the gherkins. Chop the onions as usual or cut them into thin half-rings, then cut the mushrooms into fine slices or – if you want to do it quickly – quarter them. For four people should calculate about 500 grams of meat, 500 grams of mushrooms and eight to ten cornichons.

Now, in a large frying pan with edges, briefly fry the fillet strips and the onions and keep warm. Then fry the cucumber slices and mushrooms briefly as well and deglaze with about 300 ml of meat stock (either grainy stock from a jar or stock cubes). If you like, you can also add a good sip of white wine to the sauce. Now simmer at low temperature for about a quarter of an hour, then stir in a quart of cream and season the sauce with pepper and salt. Only then add the meat and let it simmer for a short minute. Now serve immediately with the pasta prepared either before or in parallel.

For many, the best thing you can make with eggs, potatoes and bacon: Farmer’s Breakfast. However, the simple dish needs a bit of prep time to allow the boiled potatoes to cool before they become tasty fried potatoes. Not only are they easier to cut that way, but the potato starch sets better so they don’t get soft and mushy when fried.

Here’s how it’s done: plan on about 250 grams of potatoes, two eggs and about 100 grams of bacon per person. Then peel the potatoes and boil them not too soft. After cooling, cut the potatoes into not too narrow slices and fry them slowly in a large pan with a finely chopped onion on a medium flame and with a lot of patience in plenty of fat. Keep turning so that the potato slices are evenly browned and crispy on all sides. Then add the chopped bacon and fry. At the same time, whisk the eggs in a cup with some salt and pepper and push the fried potatoes together on one half of the pan. Now pour the egg mixture into the pan and let it set.

Once the egg is set, use a spatula to place the side that is just covered with the baked egg over the roasted potato half and then directly onto the plates.

SeaHelp Extra Tip: If you like it meatless, instead of ham or bacon you can also shred in feta, peppers, mushrooms or broccoli – whatever the fridge (still) has to offer.

The world-famous American salad has nothing to do with the Roman emperor, but with its inventor, Caesare Cardini. On America’s National Day in 1924, the Italian who had emigrated to the United States experienced an unprecedented rush of visitors to his restaurant and ran out of dishes on the menu. Now Caesare improvised with the leftover ingredients and created a very special dressing – Caesar’s Salad was born, whose base of wide strips of romaine lettuce, tender pieces of chicken tenderloin and shavings of Parmesan is known worldwide.

To give the chicken more flavor, it can be marinated in a marinade of olive oil and paprika before sautéing. In parallel, leftover bread or baguette can already be used to make small croutons in the pan.

The dressing is the highlight: an egg yolk, pepper, salt and a teaspoon each of mustard, honey and lemon juice form the basis for the mayonnaise-like sauce and are stirred together vigorously. Then about 100 milliliters of olive oil is slowly poured into it and vigorously whisked in. Once a creamy substance is formed, very finely chopped onion pieces and also finely chopped anchovy fillets are stirred in.

SeaHelp Extratripp: If you like, you can also garnish the salad with hard-boiled eggs and further refine the sauce with a few capers.

Tags: Croatiaon boardWining and dining
PrevPreviousEmergency situation on board: How do I behave correctly in the event of a breakdown on the water?
NextArea Compass Croatia: Quickly filter out the best things for a successful cruise.Next
SeaHelp Service
Current fuel prices
Für tagesaktuelle Kraftstoffpreise
bitte hier klicken!
SeaHelp Service 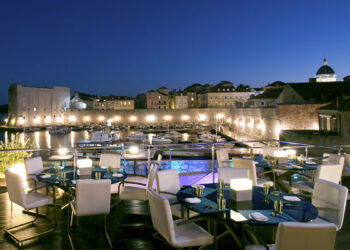 Worth a Stop: Starred Restaurants in Croatia 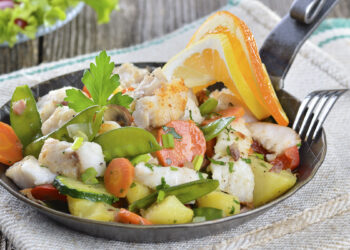