Autor: Matthias Müncheberg
Inhalt Anzeigen
1. In an emergency, it is best to make the distress call via the SeaHelp app
2. Good to know: the SeaHelp app with the emergency call function is available to all skippers
3. The crew should be prepared for the arrival of the response boat in case of a breakdown

If, despite good preparation for the trip, good maintenance of the yacht and good seamanship, an unexpected mishap does occur on the water, crews can do a lot to expedite any necessary deployment of SeaHelp personnel. In addition, good preparation of the damaged crew can help make the rescuers’ job easier when they arrive and optimize procedures.

Despite all precautions, it may well happen that the crew gets into an emergency situation and the yacht needs assistance from a SeaHelp response boat. The reasons for this can be varied and can also affect the crew through no fault of their own, for example if a line gets caught in the propeller, the starter battery has given up the ghost or the yacht had grounding. For this “worst case scenario,” the crew should be prepared, and know how to correctly place an emergency call.

In an emergency, it is best to make the distress call via the SeaHelp app

“If a distress call needs to be made, it’s best to do so via the SeaHelp app,” advises experienced SeaHelp operations manager Marko Orlic, as this is the most accurate way to determine the position. To do this, simply move the red distress button (SOS) of the SeaHelp app from left to right in a first step and additionally confirm the distress call by sending a distress SMS message.

“This then automatically sends an emergency SMS to the SeaHelp operations center, which contains and transmits both the cell phone number and the correct, current position data”, explains Marko Orlic.

A SeaHelp employee from the operations center then calls back immediately to get an overview of the situation. For the task forces, it is helpful to know in advance whether it is an owner or a charter yacht, how big (long) the yacht is, and whether it is a motor yacht or a sailing yacht.

The problem on board should also be described as precisely as possible: if, for example, the engine has failed, it is important to describe the general conditions exactly, for example:

Depending on the need, a SeaHelp response boat then moves out immediately and / or other necessary measures are initiated immediately.

Good to know: the SeaHelp app with the emergency call function is available to all skippers

“The SeaHelp app with the emergency call function is available to all skippers without exception, regardless of whether they have taken out a membership or not,” says SeaHelp CEO Wolfgang Dauser. The only difference between members and non-members, he says, is the cost of the service: “While almost all SeaHelp services are free of charge for members according to the status of the membership booked, requests for assistance from non-members can only be processed against reimbursement of the costs specified in the SeaHelp price list for the respective effort,” says Wolfgang Dauser.

In addition, it should be noted that if several requests for assistance of the same priority level are received at the same time in the operations center, for example after a storm, SeaHelp members will be given priority; SeaHelp therefore advises to conclude an appropriate membership, Wolfgang Dauser continues.

Life jackets should be donned if necessary prior to the arrival of the response boat, and in the event of engine failure or similar problems, an (emergency) anchor should be deployed in a timely manner if possible – especially in a leeward hull situation – to prevent stranding or grounding. “In the event of water ingress, the bilge pump should be checked and, if in doubt, the engines should first be switched off,” advises operations manager Marko Orlic, because water often enters the boat through the engine compartment. Finally: in the event of a salvage operation, it should first be checked whether anyone on board is injured. 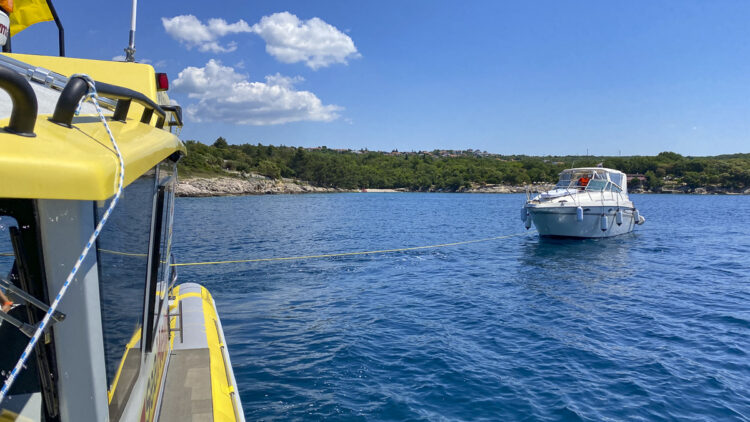 “When the SeaHelp emergency boat arrives, the crew should then draw attention to themselves, tell the emergency workers your SeaHelp membership number if available and have the boat documents ready,” advises operations manager Marko Orlic.

If services are to be used that are not included in the booked membership package, the crew should first have the costs quantified. The payment should then be made after the intervention has been carried out, after which an original SeaHelp invoice will be issued. Possible methods of payment are cash (in Kuna) and credit card (Master or Visa).