Anchoring often looks simple, but requires time and adherence to a few simple routines if it is to be safe. To kick off the season, a brief overview of the biggest misconceptions about anchoring – and the most important rules.

No question – nothing draws the eye more like a yacht that elegantly steers into the bay. Skillfully stops. Drops its anchor and on which the crew jumps into the water as soon as the skipper turns off the engine. Pure summer joy – and by the way, it looks as if the skipper knows his trade.

Is anchoring really that easy? What looks casual is often carelessness. And most of the time, you’re not wrong. The weather is nice. What can go wrong, says the carefree. But to ensure that the longed-for cruise really is a dream cruise, you should remember shortly beforehand how to anchor properly.

Clear sky. Calm sea. Only a gentle ripple on the water in the bay. The skipper has so much chain out that the anchor is just on the bottom. “What’s the point of bringing the anchor in now for the short swim stop?” even experienced Croatia sailors will say.

Wolfgang Dauser, founder and managing director of SeaHelp, knows better. “The cause of many SeaHelp missions is the so-called swim stop in the best conditions. When a ferry passes the bay a few nautical miles out, it often happens that the ferry swell hits the carelessly anchored yachts unprepared – and 5-10 meters astern. That’s enough for groundings and violent collisions with other boats.” 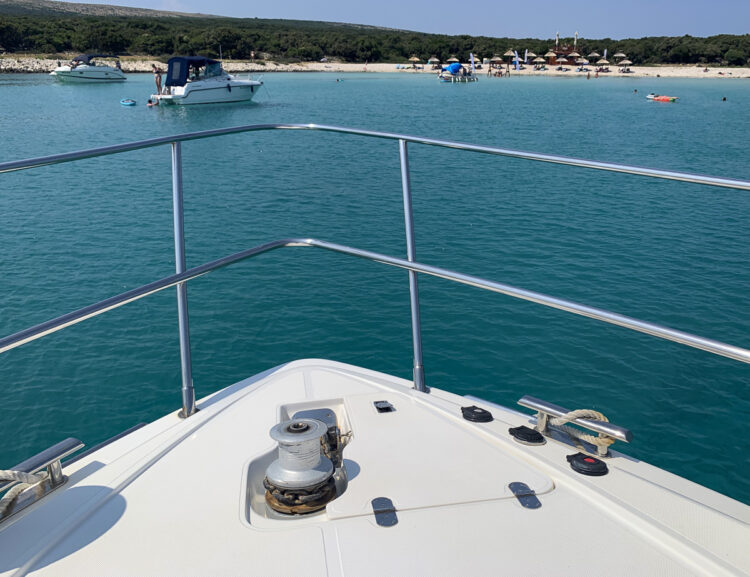 “I have quite a bit of chain out there!”

Also in the current interview in YACHT magazine’s CROATIA SPECIAL, Wolfgang Dauser talks about one of the most common seamanship mistakes behind such accidents: “In 70 to 80 percent of all cases, too little chain is put in. Or it was anchored too close to the rocks.”

Right is: At least five times the chain length of the water depth is needed to lie safely – so for example, at 5 meters water depth 25 meters of chain. But it is easy to be mistaken about the length that is really out there. To check it, charter yachts often have markings on chains. And if not? The simplest way not to be mistaken about the issued chain length, even without markings, goes like this:

Does it really hold? To be sure, there is only one thing you can do: test it! Anchoring without testing is like driving a car without a seatbelt – you don’t know where and how you will hit the ground if the worst happens. Testing goes in several ways:

Control with bearing marks on the shore.

Go into the water with a snorkel and goggles. Snorkel to the anchor and see if it has dug neatly into the sand or debris. Or if it’s just hanging with the tip on a rock outcropping or just lying lazily on its side or loose on sea grass. Because it won’t hold that way. For this test, you ideally need 5 meters of water depth. From 10 meters, the anchor often already disappears in the dark, depending on the light conditions.

By the way: Who wants to sleep quietly in anchor bays during the night when the wind is blowing outside, applies all three procedures. And do so at every anchor maneuver. At every night anchorage. Even in the best conditions. 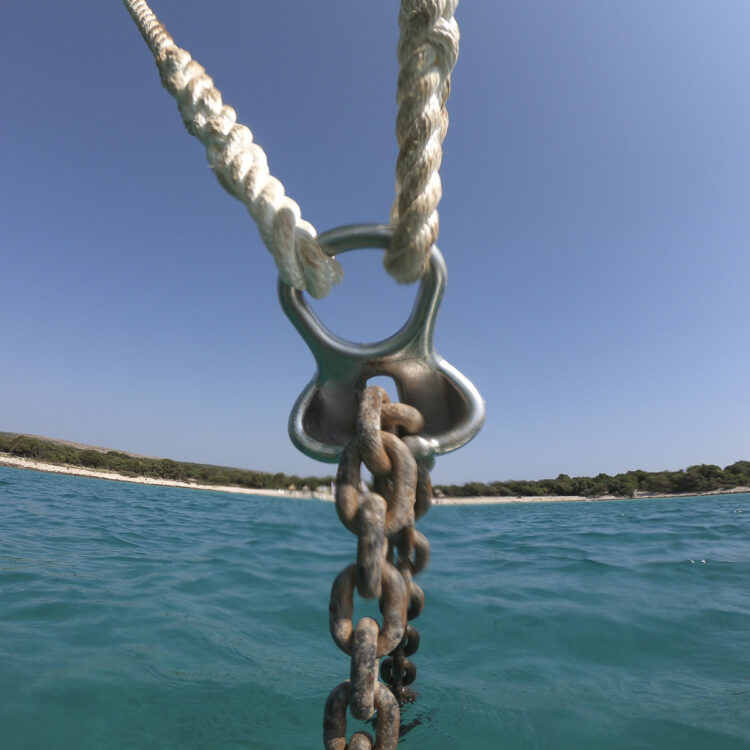 “With my anchor, I’ll anchor anywhere.”

Confidence in your equipment is good. However, you should know the bottom – especially the bottom under your boat. When looking for a anchorage, look for suitable areas of sand where anchors will find the best hold. Seagrass is less suitable, apart from the worse hold on the slippery seagrass tufts anchors destroy the valuable Posidonia fields, which for example on the Balearic Islands is sharply monitored and strictly punished by specially engaged nature conservation guards.

Rock slabs are also second choice and only suitable for short-term anchoring in shallower water depths of 4-5 meters, in order to be able to dive down or help oneself in case of doubt. Unsuitable are rock slabs with crevices or other rock formations in which the anchor can get caught. If the anchor should nevertheless get jammed: SeaHelp helps!

“We anchor two at a time in a pack. If everyone has their anchor out, we’ll be even safer!”

Sounds logical, but can end fatally. When the two yachts get caught in the swaying by current or wind, when nighttime gusts from different directions cause the yachts to dance in circles, the supposed safety aspect becomes an emergency. A single silent turn in a circle is enough, and the chain salad is ready. The yachts are stuck together, for better or worse. Or can only be separated by loosening and abandoning the anchor harness – a maneuver that is especially dangerous in critical weather conditions.

If you want to remember more about anchoring before your cruise, such as the correct order for anchoring from A to Z, also read “Anchoring, but properly: 10 tips for the perfect anchor maneuver” and “Anchoring properly: What every skipper should consider“.

Anchor bays can be found in our SeaHelp app on the “info map”, with many drone photos, drone videos and 360 degree images, so you can already look at many bays in advance and plan your trip perfectly.

Tags: AnchorageanchoringGuide
PrevPreviousThunderstorms in Croatia: The five biggest misconceptions about thunderstorms at sea.
Next24/7-Service: SeaHelp is available in case of breakdown or emergency via app or with the phone helplines around the clockNext
SeaHelp Service
Current fuel prices
Für tagesaktuelle Kraftstoffpreise
bitte hier klicken!
SeaHelp Service