2.11.2022
in Area Balearic Islands, News General
|
Update: 2.11.2022
|
Autor: Matthias Müncheberg
Inhalt Anzeigen
1. By 2030, only electric yachts are to be allowed to be rented out on Mallorca and the neighboring islands
2. Boat rental companies are to upgrade and convert their fleet until it is completely emission-free in eight years
3. Sustainable tourism is not a dream of the future, but already a feasible reality
4. There can be no talk of an “end of the industry”; rather, the draft law should be seen as an opportunity

No question – the cambio climático, climate change, with its sometimes extreme weather events has also had an impact on the Balearic Islands (Mallorca, Ibiza, Menorca, …) quite concrete effects. But what to do? Above all, responsible, environmentally conscious action is called for here. This concerns the private as well as the economic sector equally.

As a private, foreign tourist, for example, instead of flying more often to the Balearic Islands for short vacations, you can travel less often, but stay longer. Who eats less meat, meets the climate killer mass breeding. If you install solar cells on the roof of your house, you prevent emissions. So far, so good, because: these initiatives were – until now – voluntary.

By 2030, only electric yachts are to be allowed to be rented out on Mallorca and the neighboring islands

So it provides at least a “draft amendment to the regional climate change law”, which was prepared by the Balearic Energy Ministry under Juan Pedro Yllanes, as the Mallorca newspaper reported on 26.10.2022.

According to the report, boat rental companies are to gradually upgrade their fleets until they produce zero emissions in eight years. This has led to an “outcry in the industry”, yacht rental companies are “angry” and would even speak of the “end for their industry”, headlines the Mallorca newspaper, because, according to the argumentation of the head of the Balearic Yacht Charter Association José María Jiménez, the supply of electric boats on the market is “limited”, and the ship batteries would “explode when they come into contact with salt water”.

The company Natural Yachts from Heeg, for example, shows that there is another way – and that marine batteries can indeed be safe. The family-owned company develops, rents and sells modern, luxurious – but above all 100 percent electric – motor and sailing yachts, including the Swedish high-tech tender Eelex 8000, the luxurious 12-meter motor yacht Northman 1200 Electric and a nine-meter Nexus Revo 870 Electric motor yacht.

Sustainable tourism is not a dream of the future, but already a feasible reality

Global warming has far-reaching consequences, leading to extreme weather events such as floods, forest fires and melting ice caps, say Josien and Sarah Poorting of Natural Yachts; tourism is responsible for about eight percent of global emissions. With its 100 percent electric rental fleet, Natural Yachts shows that a sustainable tourism offering is not a dream of the future, but already a feasible reality, they say.

Many boat manufacturers have been involved in the production of electrically powered boats and yachts for some time: Greenline was one of the pioneers in the industry, Frauscher recently unveiled its twin-hulled electric boat TimeSquare 20 – powered by Torqeedo’s proven and mature E-Power, Axopar unveiled an e-motorboat in Cannes, and even renowned luxury shipyard Riva showed a new electric boat at the Cannes Yacht Festival – just a few examples of an industry in transition.

There can be no talk of an “end of the industry”; rather, the draft law should be seen as an opportunity

So there is no question of an “end of the industry”, as feared by boat rental companies on the Balearic Islands. What has already been established on the road will – consistently – now also become reality on the water in the foreseeable future. In its new “Fit for 55” climate plan, the EU Commission is calling for annual CO2 emissions from new vehicles to be reduced to zero by 2035.

By then at the latest, only pure e-cars or passenger cars fueled with hydrogen, biofuel or e-fuels could be newly registered. Norway is taking an even more rigorous approach: the non-EU country is even planning to ban internal combustion vehicles as early as 2025.

Instead of calling the Balearic regional government’s plan “completely unfeasible” (according to MZ), like Charter President Jiménez, and fighting it with all means, the “draft amendment to the regional climate change law” can also be seen as an opportunity for an industry that, according to its own statements, operates 3,500 boats on the Balearic Islands and secures around 4,000 jobs. And finally – eight years is a long time, enough time in any case to be able to upgrade or refit the fleets in a structured and calm manner. 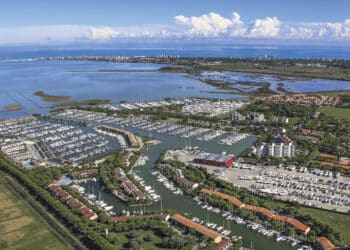 It does not always have to be new: The used boat show NAUTILIA in Aprilia Marittima